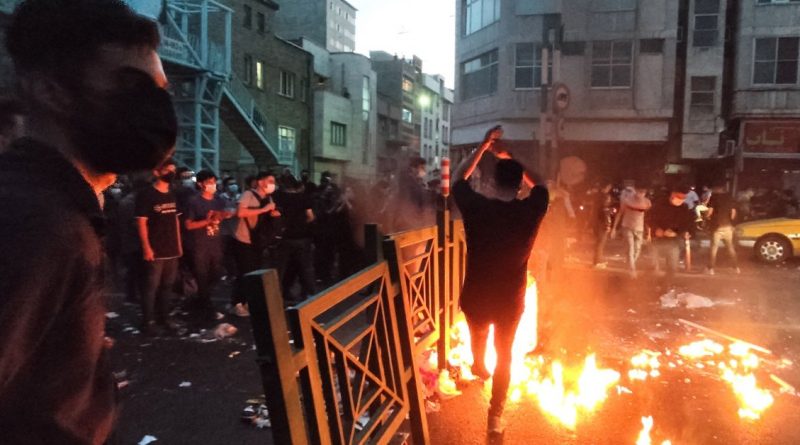 
In the wake of the death of 22-year-old Mahsa Amini, who died in custody of the Iran’s morality police last month, civil unrest in the country has grown to a scale larger than what Iran has experienced in years. Protesters are calling for justice for Amini as well as personal and political liberties and accountability from the nation’s government.

Rights groups say the protests, which have spread to more than 80 cities in Iran, have led to hundreds of arrests, including numerous journalists, and violence against protesters. Internet access remains limited in the country as the Iranian government strictly regulates its usage. Those analyzing the country’s protests say that the movement likely won’t die down soon.

The protests have been deadly

Since protests began in mid-September, it’s unclear how many people have died at the hands of police during the protests. On Sept. 26, Iran’s state-run broadcasting service reported that 41 people had died including protestors and security forces. But Iran Human Rights (IHR), a Norway-based nonprofit, reported on Oct. 4 that at least 154 people had died in the protests.

At least 66 deaths reportedly took placeon Sept. 30 in Zahedan, now called “Bloody Friday,” according to Amnesty International. Security forces in Zahedan, the capital of the Sistan and Baluchestan province, and home to some of the highest death counts since protests began, initiated a brutal crackdown where they deployed live ammunition, metal pellets and teargas on protesters, worshippers and bystanders after Friday prayers outside the city’s main mosque.

Nika Shakarami, a teenage protestor whose mother alleges that security forces murdered her, is one of the highest-profile cases of a young person dying in the protests.

Shakarami went missing on Sept. 20 in Tehran after sending a friend a message that she was being followed by the police.

Authorities claim that Shakarami had gone into a building that night where construction workers may have pushed her from a high point and that her body was found outside the next morning.

Tehran judiciary official, Mohammad Shahriari, told the state media that Shakarami had sustained “multiple fractures… in the pelvis, head, upper and lower limbs, arms and legs, which indicate that the person was thrown from a height.”

Her family disputes this account, and Shakarami’s mother spoke out in a video to Radio Farda that the injuries she saw on her daughter’s body were very different from what authorities described. BBC reports that Shakarami’s mother said a forensic report indicated that Shakarami was killed by blunt force trauma to the head and a death certificate obtained by BBC stated that she suffered “multiple injuries caused by blows with a hard object.”

After Shakrami’s death, members of her family were seen on state television confirming that her cause of death was falling from a building. Shakarami’s mother also told Radio Farda that these were forced confessions and that authorities threatened their family’s safety if they didn’t cooperate.

Where the protests stand now

The nationwide protests have only grown since September after Amini’s death. Beginning as demonstrations on the streets and through social media condemning what protestors say was Amini’s unlawful killing, the protests in Iran are now fueled by the government’s brutal oppression demonstrated in the past few weeks and longstanding frustration against the country’s authoritarian regime.

At demonstrations across the country, people have reported and recorded videos of unarmed protesters being beaten and harassed by the police.

Student protests have been prominent in the movement at universities across the country, a key change from decades of politically dormant youth. At universities like Sharif University in Tehran, authorities have been particularly aggressive, the New York Times reported, and people on the campus described violent scenes of bullets flying, tear gas deployed and blood on the ground.

Iranians are expressing a range of frustrations over issues like the country’s mandatory modesty laws, the harsh restrictions imposed on people’s political choices and speech and the government’s discriminatory practices against ethnic minorities. IHR said that over the past three weeks, at least 1,200 people have been arrested, including 29 journalists, 20 activists and 19 teachers, according to government arrest reports.

On Sept. 21, Iran’s top-level military authorities gave orders to security forces in all provinces to “severely confront troublemakers and anti-revolutionaries,” according to an investigation by Amnesty International. Authorities have continued to block internet access, a tactic presumably to prevent the spread of information.

How the rest of the world has reacted

World leaders have condemned the Iranian government’s actions since news of Amini’s death and protests spread. Protests have expanded abroad and people outside of the country have taken up circulating Iranian accounts and footage of what’s going on to raise awareness. Despite the attention, Iranian authorities have not backed down on suppressing and arresting protestors. The country’s supreme leader Ayatollah Ali Khamenei said the “riots and insecurities were designed by America and the Zionist regime” to undermine his government’s authority.

On Oct. 3, President Biden shared support for the protests saying, “The United States stands with Iranian women and all the citizens of Iran who are inspiring the world with their bravery,” and added that his administration “will be imposing further costs on perpetrators of violence against peaceful protestors.”