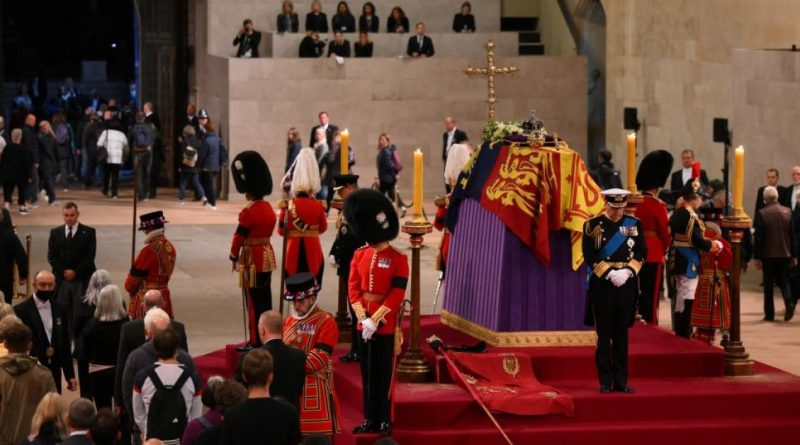 
The ten days of public mourning following the death of Queen Elizabeth II will end on Monday, Sept. 19 with a full day of funeral proceedings, which begin in London and end in Windsor, where she will be laid to rest.

Queen Elizabeth II’s funeral at Westminster Abbey will be attended by world leaders, including President Joe Biden and First Lady Jill Biden, and representatives from across the Commonwealth of Nations—most of which were part of the former British Empire.

Processions through the streets of London, and then to the royal residence at Windsor, will also take place until Queen Elizabeth II is laid to rest that evening at St. George’s Chapel on the grounds of Windsor Castle.

Monday is a holiday across the U.K., with many businesses and schools closed so citizens can watch broadcasts of the events, which start at 4 a.m. and extend past 7:30 p.m.

Globally, millions are expected to view the coverage of the ceremony at Westminster Abbey, where Elizabeth married Prince Philip and had her coronation. This will be the first funeral for a British monarch to take place at the Abbey since the 18th century, and the first time cameras will be allowed inside any funeral ceremony for a British monarch.

Here is the schedule for Queen Elizabeth II’s funeral, along with details of what to expect.

You can watch the funeral live on time.com.

6:30 a.m. (1:30 a.m. ET): The doors of Westminster Hall at the House of Parliament, where Queen Elizabeth II has been lying in state, close to the public

10:44 a.m. (5:44 a.m. ET): The royal procession leaves from the Palace of Westminster to Westminster Abbey. The state gun carriage will carry Queen Elizabeth II’s coffin, accompanied by musicians such as the band of royal marines, and the path will be lined with members of the royal navy and royal marines. Members of the royal family, including King Charles III and Prince William, will follow behind the carriage.

11 a.m. (6 a.m. ET): The ceremony begins, led by Dean of Westminster David Hoyle, and will include readings and prayers by political and religious leaders including the new U.K. Prime Minister Liz Truss.

Noon (7 a.m. ET): The funeral ends with reveille, the U.K. national anthem (“God Save the King”), and a lament by the queen’s piper. The coffin will go on another procession through the streets of London as Big Ben tolls continuously.

1 p.m. (8 a.m. ET): The coffin arrives at Wellington Arch in London, where it is loaded into a hearse. From here, the royal family departs for Windsor Castle, which is about 20 miles west of Buckingham Palace.

3:06 p.m. (10:06 a.m. ET): The state hearse arrives in Windsor, where it will join a procession heading up Albert Road. The King and other members of the royal family will join the path on foot to St. George’s Chapel roughly thirty minutes later.

4 p.m. (11 a.m. ET): The Committal Service begins at St. George’s Chapel, conducted by the Dean of Windsor and ending with a blessing from the Archbishop of Canterbury.

7:30 p.m. (2:30 p.m. ET): Queen Elizabeth II is laid to rest in a private ceremony in King George VI Memorial Chapel at Windsor Castle. She will be buried with her late husband, Prince Philip.

Which members of the royal family will be involved?

Members of the royal family and King Charles III’s household are scheduled to have roles throughout the day, though not all details of where and how each royal will be involved are public.

In some specific instances, the palace has detailed the moments in which King Charles III, Prince William, Princess Catherine, Prince Harry, and Meghan Markle will take part in the proceedings. Viewers can expect to see members of the royal family including King Charles III and Prince William in his role as heir apparent and Duke of Wales immediately following the casket as it sets off from Westminster Hall.

Following the funeral at Westminster Abbey, a group including King Charles III, Queen Consort Camilla, William, Kate, Harry, Meghan, Princess Sophie and other members of the family will follow the coffin on foot to Wellington Arch. This group will then join the official procession by car to Windsor.

Westminster Abbey has roughly 2,000 seats to accommodate the extensive list of those who will pay their respects to Queen Elizabeth in person.

The royal family itself has not released a list of attendees, but many heads of state and other dignitaries have voiced their plans to attend the Westminster Abbey ceremony on the 19th. The Bidenssaid they will be there, along with the leaders of Italy, Japan, Germany, New Zealand, Canada, Kenya, and Australia, among others.

Numerous royal family members, including Queen Elizabeth II’s children Princess Anne, Prince Andrew, and Prince Edward, will also populate the pews of the Abbey. A long list of royals from other European countries will be there, too, including King Felipe VI and Queen Letizia of Spain, Carl XVI Gustav of Sweden, King Willem-Alexander and Queen Maxima of the Netherlands, King Harald V of Norway and King Philippe and Queen Mathilde of Belgium.

Representatives from all parts of the Commonwealth are scheduled to attend, along with people that the Queen included on her annual honor’s list this past year, which celebrates outstanding citizens and community leaders.

Stateside, several network news and cable news channels will air the funeral ceremony live at 6 a.m. ET, so viewers can tune into their choice of ABC, BBC America, C-SPAN, CNN, Fox News, NBC and PBS for the event. In the U.K., BBC One, BBC News and Sky News will all run a full day of coverage.

Time.com will also livestream the event.

The BBC will livestream its coverage for free globally, as will ITV News and Sky News, so those with internet access can view on their sites or on Youtube. News outlets across the world will also broadcast feeds: for example, Canadian viewers can tune in to CBC, and ABC News in Australia will run the program.