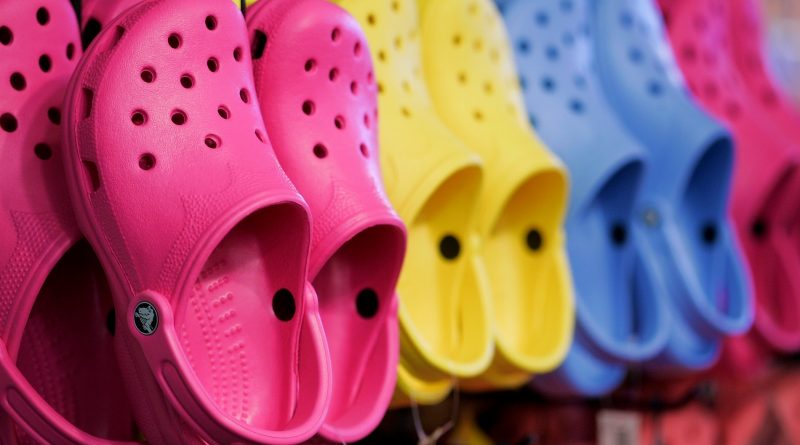 A snarled global supply chain is hurting retailers, from shoe brands to department store chains, and threating their performance this holiday season.

But Crocs says it has created a playbook to manage through the crisis with mitigated impact. On Thursday, the company’s fiscal third-quarter earnings and sales smashed Wall Street estimates, and Crocs hiked its full-year revenue outlook. The news sent Crocs shares soaring; the stock was recently up about 7%.

Chief Executive Andrew Rees explained on an earnings call a key advantage is the fact that the retailer’s clog shoes are easy to make, and so the company faces fewer hurdles in shifting production around, when needed.

“Our shoes are really simple, and so [swapping] factories can be very, very quick,” Ress explained. “The classic clog has three components, two of which are made on-site, so you don’t have a lot of external logistics to be able to get started. We think we’re competent in terms of rapid manufacturing.”

Crocs was quick to begin diversifying its manufacturing overseas, especially with facilities in Vietnam facing prolonged shutdowns due to pandemic lockdowns in the region. In the short term, the company said it has moved some production back to China and Bosnia. It’s also ramping up production in Indonesia, and it has a facility in India expected to be online by next year.

Vietnam has traditionally represented a significant chunk of Crocs’ manufacturing base. It was expected to account for about 70% of production by the end of this year, the company said, but will be less due to Crocs’ diversification efforts.

As of this week, most of the retailer’s factories in Vietnam are operational again, according to Ress. Workers are coming back to plants “pretty effectively,” he added. But Ress said Crocs is still cautiously planning for an “on again, off again” situation in the region.

Meantime, to avoid massive logjams at West Coast ports, the company said it has been building a larger presence along the East Coast to reach its customers in the United States. Crocs has also been using air freight instead of cargo transportation to move orders in preparation for spring and summer of next year.

“We will prioritize our most important channels,” Ress said.

Crocs is anticipating to face some inflation next year, primarily from heightened freight and wage costs, it said. The retailer has already slightly increased the prices of some of its clog shoes. Pulling back on promotions has also helped to balance out inflationary pressures.

“We’re proactively looking at other measures and things that we can do to kind of offset any inflationary pressures,” Chief Financial Officer Anne Mehlman told analysts.

Crocs shares have soared more than 140% year to date. The company has a market cap of $9.3 billion.