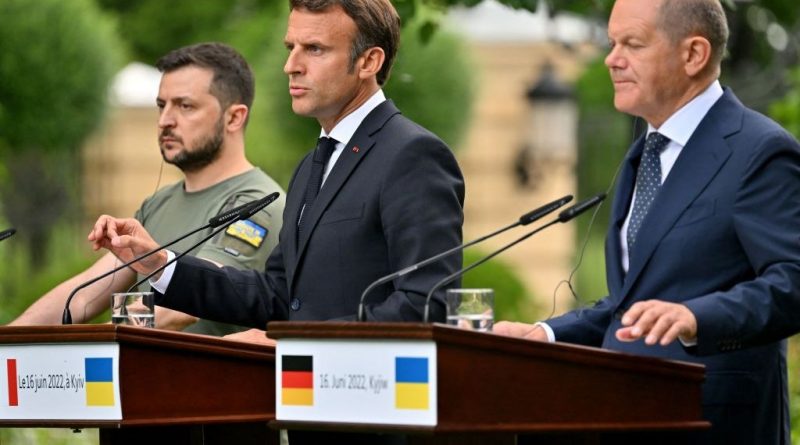 
Four European leaders became the latest heads of state to visit Ukraine Thursday as it continues to fend off Russian forces that have recently made significant advances in the country’s southern and eastern regions.

Zelensky has previously criticized France, Germany, and Italy for being restrained in their support for Ukraine. He has also previously accused Macron for trying “in vain” to negotiate with Russian President Vladimir Putin.

Below, a list of world leaders who have visited Ukraine since the war began:

Macron had recently spoken in support of Ukraine’s attempts to secure E.U. candidate status. “I want us to send a clear and positive signal, but we have to build unanimity among E.U. members,” he said Wednesday. But he also added, “If we applied normal rules, we would not grant [E.U. candidate status]. It’s the context of war that makes us consider this move.”

Scholz has been outspoken in his support for Ukraine’s E.U. candidate status bid. “We came to #Kyiv today with a clear message: Ukraine belongs to the European family. Germany wants a positive decision in favor of Ukraine as a #EU candidate country,” he tweeted Thursday.

Germany has been skeptical about E.U. membership for Ukraine. “Ukraine is an integral part of Europe, I wish that we will find a strong and convincing answer to your desire to join—even if there can be no shortcut on the way to full E.U. membership,” said Foreign Minister Annalena Baerbock in May.

“The biggest message we want to send in this trip is that Italy wants Ukraine in the E.U.,” Draghi said Thursday, according to Bloomberg News. “Italy, France, and Germany are here to give unconditional support to Ukraine.”

British Prime Minister Boris Johnson made a surprise visit to Kyiv in April amid promises of more military aid. “The U.K. will send more defensive weapons to Ukraine and will work with G7 partners to target every pillar of the Russian economy to ensure Putin fails,” he tweeted shortly after the visit.

Canadian Prime Minister Justin Trudeau visited Ukraine on May 8 and discussed getting additional humanitarian, financial, and military assistance from the international community. “As Russia continues its ongoing illegal and unjustifiable war against Ukraine, Canada will continue to be there to support Ukraine and its people,” Trudeau said in a statement.

Other world leaders who visited Ukraine

The prime ministers of Poland, Czech Republic, and Slovenia were the first Western leaders to visit Ukraine on Mar. 15. Presidents from Estonia, Latvia, Lithuania, and Poland visited Kyiv on Apr. 13 to meet with Zelensky to rally for military support from the international community and condemn Russia. “This is not war, this is terrorism,” Polish President Andrzej Duda said at a news conference, Reuters reported.

U.S. President Joe Biden’s decision to not visit Ukraine since the war broke out has drawn scrutiny. (First Lady Jill Biden made a surprise visit last month.) The White House has previously cited security concerns as the main deterrent. The U.S. announced Wednesday that it would be sending an additional $1 billion in military aid.