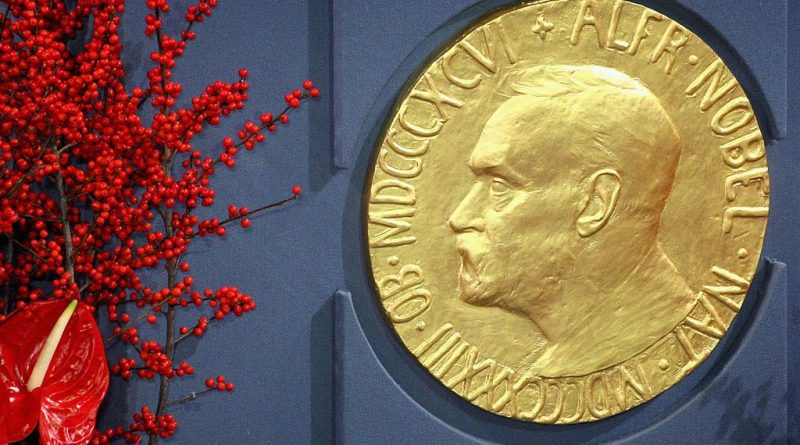 
The winner of the Nobel Peace Prize will be announced at 11am local time on Friday in Oslo, Norway.

The Peace Prize is one of six awards established by Swedish chemist (and inventor of dynamite) Alfred Nobel in 1895. The prize is considered the most expansive in its recognition, given that it awards people “who have conferred the greatest benefit to humankind.” The other five recognize contributions in literature, physics, chemistry, physiology or medicine, and economic sciences.

The winner is selected by the five-person Norwegian Nobel Committee, which is appointed by Norway’s parliament.

According to a Reuters survey, Belarusian opposition politician Sviatlana Tsikhanouskaya, British nature broadcaster David Attenborough, the World Health Organization, environmental activist Greta Thunberg, Pope Francis, Tuvalu’s foreign minister Simon Kofe, and Myanmar’s National Unity government are among those who have been nominated by Norwegian lawmakers. The lawmakers have a track record of picking the eventual winner.

Below, a list of some of the favorites to win, based on nominations that were made public via Norwegian lawmakers, predictions from bookmakers, and picks from the Peace Research Institute Oslo, and .

Ukrainian President Volodymyr Zelensky, who was on the 2022 TIME 100 list, is the bookmakers’ favorite to win the peace prize. After Russian President Vladimir Putin’s full-scale invasion of Ukraine on Feb. 24, Zelensky stood firm in Kyiv. He recorded a simple message, saying: “We are here… We are in Kyiv. We are protecting Ukraine.”

Zelensky has since repeatedly spoken out against Russia’s actions on the global stage and urged international allies to punish the Kremlin for its aggression. He has had his share of close escapes; as the war first broke out, Russian troops were just minutes from finding him and his family. And more than seven months after the conflict broke out—and after Russia annexed parts of Ukraine—Zelensky continues to advocate for the country.

The United Nations High Commissioner for Refugees (UNHCR) has been at the forefront of responding to crises in Ukraine and Afghanistan, providing cash assistance and relief items to those in need.

The war in Ukraine has led to more than 7.2 million refugees from Ukraine across Europe since Feb. 24 and more than 6.9 million Ukrainians have been internally displaced, according to the U.N. It amounts to Europe’s largest refugee crisis since the Second World War. In recent years, UNHCR has also led humanitarian responses to the Syrian war and the migrant crisis in the Mediterranean. The agency previously received the peace prize in 1954 and 1981.

Belarusian opposition politician Sviatlana Tsikhanouskaya has been living in exile ever since running against Alexander Lukashenko in the country’s 2020 presidential election. Lukashenko claimed victory despite concerns that the election was unfair and a widespread belief that the results put Tsikhanouskaya ahead of him.

Tsikhanouskaya didn’t always intend to enter politics. She was a full-time mother who had been considering restarting her career as an English teacher until May 2020 when Belarusian authorities arrested her husband—bringing his campaign to President to an end. That’s when she stepped in. Her candidacy galvanized many Belarusians and women in particular. After Lukashenko claimed victory two years ago, he ordered security forces to crack down violently on protests. Demonstrations against Lukashenko’s regime have continued since and Tsikhanouskaya has continued to play a key role in challenging the President and authorities in calls for fair elections and an end to violence.

Tsikhanouskaya was on the 2021 TIME100 Next list, which honors emerging leaders shaping the future.

For almost three years, the World Health Organization has been at the forefront of the global response to the COVID-19 pandemic. In that time, it has garnered praise for providing money, vaccines, and equipment to help contain the disease around the world. The WHO-backed COVAX program, which focuses on poorer countries, has so far delivered more than 1.7 billion vaccines to 146 countries.

But the United Nations agency has also been criticized for a series of missteps. Among them: a week’s delay in declaring the outbreak in China an international emergency, contradictory statements about asymptomatic spread, and a lack of urgency in advising people to wear masks to reduce transmission in the early phases of the outbreak.

The WHO was also considered a frontrunner to win the peace prize in both 2020 and 2021.

Russia’s jailed opposition leader and anti-corruption activist Alexey Navalny has been a key figure in fighting for democratic reform. In 2011, Navalny created the Anti-Corruption Foundation to investigate high ranking Russian officials for corruption. For years, he has worked to hold Putin’s regime—along with its allied oligarchs—accountable.

Navalny’s work has come at a high cost to his personal safety and freedom. He survived an assassination attempt in 2020, when he was poisoned by a nerve agent. Despite the danger to his life, he returned to Russia after living briefly in Germany during his recovery.

Navalny has some critics on the liberal side, too. Amnesty International stripped Navalny of his “prisoner of conscience” status after receiving many complaints about xenophobic comments he made that appeared to compare immigrants to cockroaches.

Swedish climate activist Greta Thunburg, TIME’s 2019 Person of the Year, has kept the pressure on global powers to do more to combat the climate crisis. Thunberg has long been vocal about a “lack of action” on climate change.

In 2021, she dismissed the COP26 climate summit as a “failure”—saying that it did not do enough to drastically cut CO2 emissions. More recently, she took aim at Swedish politicians—saying that they ignored the climate crisis ahead of September’s national elections.

Thunberg first rose to fame in 2018 after starting a movement for students across the world to protest in favor of actions to combat the climate crisis. The 19-year-old has been considered a favorite to win the Peace Prize every year since 2019.

Tuvalu’s foreign minister Simon Kofe has made it a key part of his mission to address the climate crisis. Rising seas are a significant threat for sinking Pacific islands like Tuvalu, which is the fourth smallest country in the world and made up of nine small islands.

Kofe delivered his COP26 speech while knee-deep in the ocean to show just how much global warming and the sea level rise was impacting the island nation. Kofe pulled out of this year’s U.N. Ocean Conference to protest China’s decision to block Taiwanese delegates.

David Attenborough, 95, is most beloved for his iconic voice and award-winning nature series, including Life on Earth and The Blue Planet. His works have intimately showcased wildlife and nature for many decades. More recently, Attenborough has spoken before the U.N. and World Economic Forum to advocate for addressing the climate crisis.

Journalists Pratik Sinha and Mohammed Zubair, co-founders of Indian fact checking website AltNews, have relentlessly been battling misinformation in India, where the Hindu nationalist BJP party has been accused of frequently stoking discrimination against Muslims. Sinha and Zubair have methodologically debunked rumors and fake news circulating on social media and called out hate speech.

Indian authorities arrested Zubair in June for a meme he tweeted four years ago. Journalists around the world condemned the arrest and argued it was retribution for his fact-checking work. “It is apparent that AltNews’ alert vigilance was resented by those who use disinformation as a tool to polarize the society and rake nationalist sentiments,” said a June 28 statement from the Editors Guild of India. The Committee to Protect Journalists also called for Zubair’s release—pointing to his arrest as “another low for press freedom in India, where the government has created a hostile and unsafe environment for members of the press reporting on sectarian issues.”

The Myanmar National Unity Government emerged as a shadow government after the country’s military detained Aung San Suu Kyi in a coup last February. The military charged her with violating COVID-19 rules and corruption. More than 1,000 people have been killed since her arrest. Thousands more have been arrested for protesting military rule.

The Myanmar National Unity Government is made up of elected officials who oppose military rule; many remain in exile. Myanmar’s military has ruled with a heavy hand—perpetuating a genocide against Rohingya Muslims and cracking down on nationwide protests calling for democratic reform.

The Peace Research Institute Oslo—which researches peaceful relations between states, groups, and people—releases an annual personal shortlist for the Peace Prize. This year, their picks for the prize included some other names and groups, such as Indian activist Harsh Mander, the International Court of Justice, Hong Kong activist Agnes Chow Ting, and the Human Rights Data Analysis Group (HRDAG).