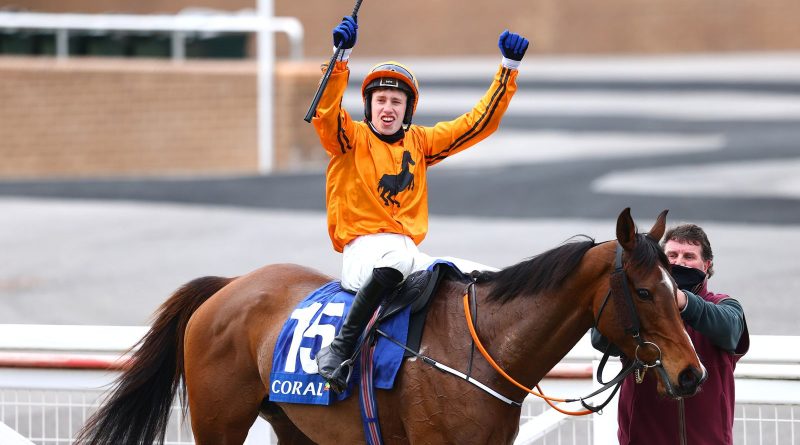 Connections of Coral Cup heroine Heaven Help Us have confirmed the eight-year-old will take in the Chanelle Pharma Irish Champion Hurdle on the way to her ultimate target, the Close Brothers Mares’ Hurdle at the Cheltenham Festival.

The Paul Hennessy-trained homebred daughter of Yeats caused a 33-1 shock when scoring at the Festival last March under Richard Condon.

Though beaten on her return to Prestbury Park in the International Hurdle in November, she was only a neck behind Royal Kahala in a Grade Three at Leopardstown over the Christmas period.

Hennessy admits he still cannot quite believe he has trained a Cheltenham Festival winner.

“What she has done for us has been absolutely amazing,” he said.

“This is all new to us. We grew up watching Cheltenham and the excitement that goes with it, but to actually go there and win is absolutely unbelievable.

“I know plenty of people who have invested a lot of money and Cheltenham is a hard place to get into. You need a good horse – but we are just blessed that this has happened for us.

“You hear people saying that Cheltenham is not the be-all and end-all, but if it is not, I’d like to know what is!

“If there is a better place for racing horses than Cheltenham, I don’t know where it is.”

The dam, Spare The Air, was the only horse in Hennessy’s yard when Heaven Help Us was foaled – and she has proved by far the best of her four offspring, taking Hennessy and owner John Turner to places they could only imagine.

“Everything about her, since the day we started – when she was fifth in a really good mares’ bumper in Ballinrobe to Gypsy Island, who is a fantastic mare – has been an unbelievable roller-coaster. It has just been amazing. It has been more than a dream. It has been just wonderful,” said Hennessy.

“Right up until the last day at Leopardstown. That was a very, very good race and we are thrilled with her.

“So, I am certain she will go for the Mares’ Hurdle at Cheltenham now, as she would have to carry nearly top-weight in the Coral Cup.

“She ran very well in that graded race at Leopardstown and while the weights suited her slightly in that, I don’t think a couple of pounds either way would have made much odds.”

Before that, Heaven Help Us is likely to return to the Dublin track to take on multiple Grade One winner Honeysuckle in the Irish Champion Hurdle on February 6, rather than run in the Paddy Mullins Mares’ Handicap Hurdle on the same card, a race she won last year.

“We probably will go for the Irish Champion Hurdle,” confirmed Hennessy.

“She will carry top-weight in the Paddy Mullins race if she was to run in that and, giving away lumps of weight to well-handicapped mares like she was last year, would not be easy.

“She would have to battle very hard – and I’m not saying she wouldn’t have to battle in the Champion Hurdle – but while it is a proper race over two miles, it would give her a workout.

“She won the Paddy Mullins last year off 10st 5lb and she would be carrying 11st 12lb or something like that this year. So that is a different ballgame.

“We will put her in the Irish Champion Hurdle, even though Honeysuckle and all those Grade One winners are in there. It might be less taxing to run her in the better race.”

All being well, connections will continue to live the dream thereafter, with their sights firmly fixed on the Mares’ Hurdle at Cheltenham, for which she is as short as 7-1 third-favourite with Paddy Power.

“Even the thought of going to Cheltenham again is crazy,” laughed Hennessy. “We are still dreaming. It is amazing. It is like a long, good dream – I just hope someone won’t go waking us up too soon!”