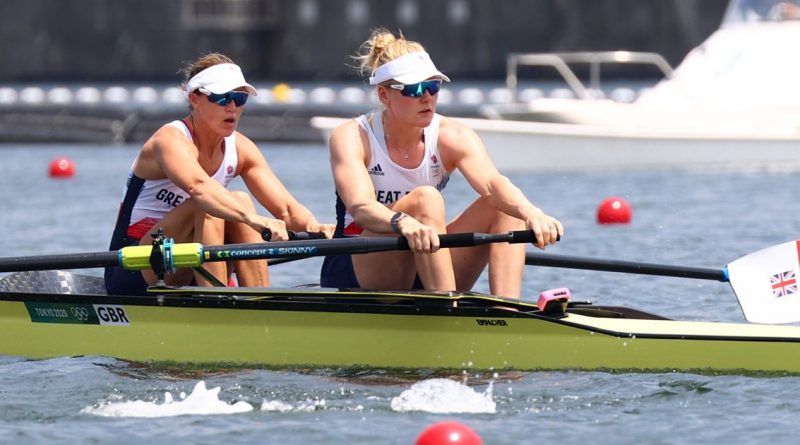 The Team GB duo finished in six minutes 54.96 seconds behind winners New Zealand as the Russian Olympic Committee claimed silver ahead of Canada

Helen Glover of Britain and Polly Swann in action (

Supermum rower Helen Glover just missed out on a medal at Tokyo 2020 today – and joked she would not be going anywhere near a boat again.

The double Olympic champion made history as the first mother to compete in rowing for Great Britain at an Olympics.

She came in fourth in the women’s pair with partner Polly Swann, 33, who wept as she was overcome with emotion in a TV interview just after the race.

Polly revealed that she will be back on the NHS front line at Borders General Hospital in Scotland ‘this time next week’.

For Helen, it was time to send ‘lots and lots of hugs and kisses’ to her three children Logan, three, and 18-month-old twins – a boy, Kit, and a girl, Bo – who she was breastfeeding in the middle of training.

She said: “Had it been on flat water as we expected then we might have come through for that last place on the podium.

It was the sixth day of the Tokyo 2020 Olympic Games
(

“I think for both of us this was about the journey here more than anything we have ever done before.

“When I think of the day to day grind and the urgency of the past year in getting here – I think how did we do that?

“We are in the middle of a pandemic and we think ‘let’s get to another Olympics’ and that is bonkers.

“We were looking back at the record of other crews in competition and I was thinking ‘three months ago I was still breastfeeding the twins’.

“They have had five years of results, and we have been through weeks and months of playing catch up and it was very different.”

When asked about the famous Steve Redgrave line after his last Olympics in Sydney back in 2000 – ‘don’t let me near another boat’ – she joked: “People have been saying they will see me in the singles but that is definitely not in the pipeline.

The pair finished in fourth place
(

“I am looking forward to going home and phoning my husband now who will be very proud of what I have done.

“The message as a mum is that you can have ambition and take risks and have no fear of the future.”

Polly, who also took time out of rowing to train as a junior doctor, said: “For Helen, she will be looking after the kids and this time next week I will be back working for the NHS.

“We gave our all to get on the podium, you cannot fault our determination for that – we fought every day in training and pushed ourselves and did exceptionally well.”

Polly, of Edinburgh, said the heat and wind had an impact on the race. Helen, born in Penzance but now Berkshire-based, thanked her mum and TV presenter husband Steve Backshall for looking after her children while she was away and in training camps for Tokyo.

Identified by an Olympic talent programme because of her height, she only took up the sport in 2008.

She struck gold at the London Games just four years later. She and Heather Stanning became the first British female rowers to successfully defend an Olympic title when they won gold at Rio 2016.

That completed a perfect Olympiad for Glover in the pair – she won every race she competed in and claimed a hat-trick of world titles, one with Polly Swann and two with Stanning.

Swann also returned to the sport after a two-year absence in 2018, while Helen believes her fight is for equality as much as glory.

“I want to show them what commitment and passion looks like.’

Many mums had been in touch simply to praise her for ‘having a go’. “I genuinely thought it was an impossible mission but I always had this day in my sights and I feel really proud that it’s here,” she added.

“I said I wanted to do it to represent other parents and people who didn’t believe it was possible. I hope that other women rowers will think there are no barriers for them to get back into the sport.”

She joked: “I was expecting to watch the Olympics on TV.”

Juggling nappies, sleep times and breastfeeding, Helen was left with just one option to keep fit – her trusty rowing machine.

When the twins napped, she rowed as long as she could. She recalled: “Then I guess slowly as I started training, I started to think: ‘I wonder if it is possible?

“Just to go back, just to be the first woman to do it.’

That news that Tokyo games had been delayed for a year left Helen with a “strange look in her eye”, said Steve.

An intense year-long training period followed, with up to three sessions a day, often around the kids’ naps, or on just “one or two hours’ sleep”.

He described his wife’s return as a “stupendous achievement”. “To my mind she is the most extraordinary role model to the kids,” he continued.

“She prioritises motherhood, alongside training for what is surely one of the most demanding and gruelling sports, and that is incredibly impressive.”

Helen admits that she had never expected to be here but says: “Coming back from having children gives you an appreciation and respect for what your body can do.”