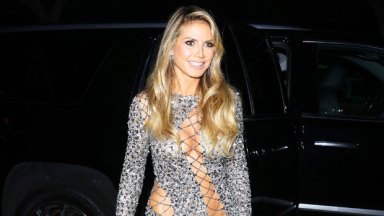 
Heidi Klum, 49, had her fans doing a double take on July 25, when she shared one of her sexiest photos ever! The model laid on an unmade bed with an open white curtain above it while wearing absolutely nothing, in the eye-catching black and white photo, which she posted to Instagram. She had one arm up as her hand rested on the top of her head and the other arm covering her chest as she gazed into the camera with messy hair.

“Come back to bed Baby ❤️,” she captioned the snapshot before turning the comments off for the post. The beauty’s fit figure was on full display and her confidence shined through, in the new gem. Since she has experience as a Victoria’s Secret model, it’s not the first time Heidi’s fans have seen her in a sexy pose, but it was still memorable nonetheless.

Before Heidi shared her latest pic, she made headlines for showing off her figure in a light blue patterned bikini during a summer vacation with her husband Tom Kaulitz, 32. The lovebirds were spending time on a beach in Miami Beach, FL last week, and looked relaxed and comfortable. She also wore a green bucket hat to keep the sun out of her eyes and flashed smiles to the camera as she walked on the sand.

Heidi and Tom were also spotted walking around the sunny city while hand in hand that same week. They were dressed stylishly with her in a black bikini top under black and white polka dotted over shirt and Daisy Dukes and him in a black and white patterned button-down short-sleeved top and white pants. They also rocked sunglasses, including white-framed ones for the German talent, and took in the beautiful sights.

Heidi and Tom aren’t the only ones with good looks in the family. Heidi’s daughter Leni, 18, has also been wowing the public with her pretty photos lately. She took to Instagram to share a pic of herself donning a brown bikini over the weekend, and got a lot of compliments from followers. “A little past sunkissed,” she cheekily captioned the pic, referring to her sunburn.

Heidi Klum’s 2 Daughters: Everything To Know About Her Adorable Girls Leni & Lou