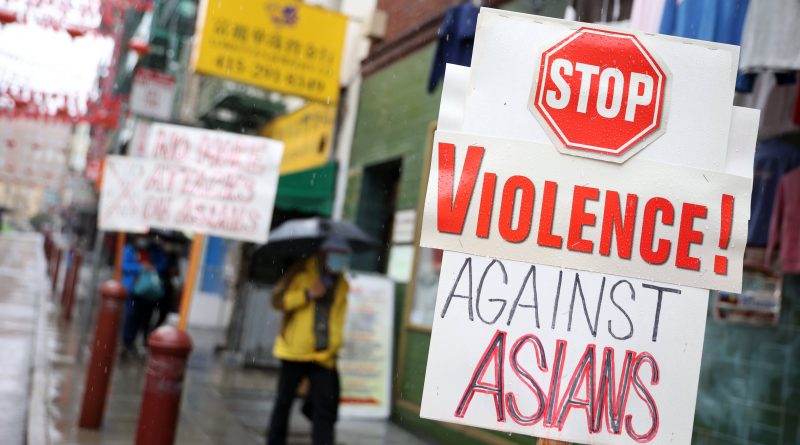 Signs against violence against Asians are posted in front of a store in Chinatown on March 18, 2021 in San Francisco, California.

The number of reported hate crimes nationwide against Asian and Black people sharply increased in 2020, according to new FBI data released Monday.

Hate crimes targeting people of Asian descent rose by a whopping 70% last year compared with the number of such incidents in 2019, the FBI said.

That increase coincided with the outbreak in the United States of the Covid-19 pandemic, which some racists have unjustly blamed on Asian Americans because of the coronavirus’ origin in China. Rhetoric attacking the Chinese government from former President Donald Trump and his allies contributed to the anti-Asian American sentiment.

In 2020, there were 2,755 reported incidents targeting Black or African American people in the U.S. — a nearly 40% spike from the year before — making them the most targeted racial group by a wide margin, according to the FBI.

Overall in the United States, hate crimes rose by 6%, according to the FBI.

The agency considers criminal incidents to be hate crimes if they are “motivated by bias toward race, ethnicity, ancestry, religion, sexual orientation, disability, gender, and gender identity.”

Attorney General Merrick Garland in a statement Monday noted that the data does “not account for the many hate crimes that go unreported.”

“These hate crimes and other bias-related incidents instill fear across entire communities and undermine the principles upon which our democracy stands,” Garland said.

“All people in this country should be able to live without fear of being attacked or harassed because of where they are from, what they look like, whom they love or how they worship.”

President Joe Biden in April signed the Covid-19 Hate Crimes Act, which was passed specifically to address the rise in anti-Asian American crimes seen during the Covid pandemic.

The law directed the Justice Department to expedite review of hate crimes related to the pandemic and to promote awareness of anti-Asian crimes. The law was signed a month after six women of Asian descent were killed along with two other people in shootings at two spas in the Atlanta area.

Incidents involving victims who were gay men were the fourth most commonly reported type of hate crime.

The data is based on incident reports submitted by more than 15,000 law enforcement agencies nationwide.

There were 7,759 criminal incidents reported and 10,532 related offenses that were considered hate crimes last year, the FBI said.

The majority of hate crimes, more than 53%, involved intimidation of victims, while nearly 46% were either simple or aggravated assaults.

A total of 22 murders were reported as hate crimes.