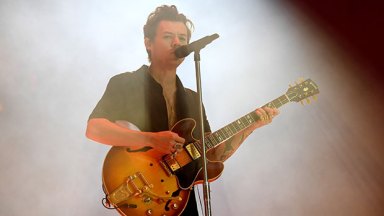 
Harry Styles is a Brit through and through. During his latest concert at Madison Square Garden in New York City, the 28-year-old paid tribute to the late Queen Elizabeth II after her death at the age of 96. “From my homeland, there was some very sad news today, the passing of Queen Elizabeth II. Please, join me in a round of applause for 70 years of service,” Harry told the crowd from the stage before leading a round of applause.

The long-reigning monarch passed away earlier in the day on September 8 at her Balmoral home in Scotland. Queen Elizabeth II died just hours after the royal family announced that doctors were “concerned” for her health. She was surrounded by family during her final moments, including Prince Charles, who is now King Charles III.

Harry had the honor of meeting the Queen during his One Direction days. In 2012, Harry took the stage with his fellow bandmates — Niall Horan, Zayn Malik, Liam Payne, and Louis Tomlinson — in honor of the monarch at the Royal Albert Hall for the 2012 Royal Variety Performance in London

The “As It Was” singer always mentions any noteworthy news while speaking with fans at his concert. In his first concert since attending the Venice Film Festival premiere of his movie Don’t Worry Darling, Harry addressed that viral Spitgate rumor. “I just popped very quickly to Venice to spit on Chris Pine,” Harry told the crowd, making light of the rumor that alleged he spit on his co-star before a screening of the film.

For all the Harry fans out there, the singer is going to be everywhere this fall. After he wraps up in New York, he’ll continue his tour with concerts around the country.

Don’t Worry Darling hits theaters on September 23. Given the newsworthiness surrounding the film, there will be plenty of Harry content leading up to its release. On top of that, his other film My Policeman will premiere at the Toronto Film Festival before being released on October 21. It’s not just Harry’s House, it’s Harry’s world, and we’re just living in it.