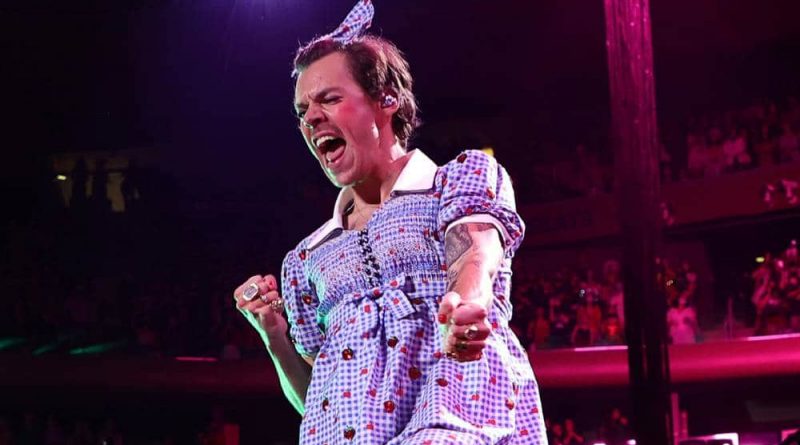 Harry Styles continued to prove his ally credentials as he helped a fan come out to her mum mid-concert.

The heartwarming moment happened during the Milwaukee leg of Style’s Love On Tour concert series.

A fan who was standing near the stage held up a sign reading: “My mom is in Section 201. Help me come out.”

Of course, Styles – being the LGBT+ ally he is – saw the sign and ran over to help her out.

At first, he held out a microphone so that she could make the announcement herself, but the bashful fan requested the singer tell her mum for her, because there were “a lot of people” at the concert.

Styles then scurried across the stage, singing to himself, before screaming: “Lisa, she’s gay!”

The concert’s cameras then panned to the fan’s mum, who appeared overwhelmed. As she composed herself, the crowd cheered on in support.

“Now, I don’t want to ruin a moment, but wouldn’t it be nice if you were a little bit closer together?” Styles joked, highlighting the physical distance between the fan and her mum at the concert.

The fan shared a clip of her joyful coming out moment on Twitter and thanked Harry Styles for creating a “moment that will actually be with me forever”.

Fans were overjoyed at the beautiful coming out moment and praised Styles for his continued support for the LGBT+ community.

harry helping fans come out is the most beautiful and pure thing in the whole world ☹️ he makes them feel so comfortable/safe and makes this moment SO special and unforgettable for these people. he’s our best friend and he is proud of every single one of us pic.twitter.com/Ok6i1uMiuI

the way harry is helping people to come out to their friends and family makes me so emotional, i could watch those videos all day 🥺 pic.twitter.com/e4PwPDewMB

HARRY HELPED THIS FAN COME OUT TO THEIR MOM DURING MY CONCERT I LITERALLY SOBBED pic.twitter.com/Q2X1dlNMkZ

Harry’s out here helping so many people come out during the shows it’s really the most beautiful thing everpic.twitter.com/esKSHE3IqX

The former One Direction star also helped a fan come out on stage at his Connecticut show just a few weeks ago.

He spotted a girl holding a sign that read “help me come out”. Styles then brought her bisexual Pride flag on stage before asking if there was anyone “you’d like to come out to”.

“When I raise this flag, you’re officially out,” he declared. “I’ve heard that‘s how it works.”