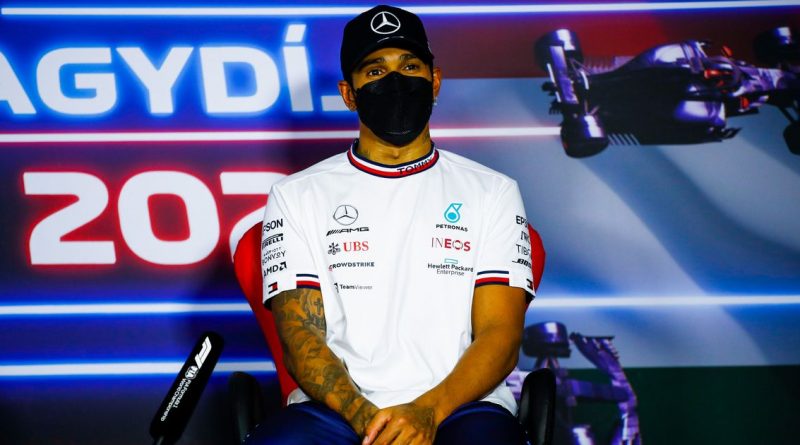 Lewis Hamilton believes he may be suffering with ‘Long Covid’ after suffering dizziness and blurred vision following an extraordinary Hungarian Grand Prix.

Hamilton came close to collapsing and had to be helped onto the podium after finishing third in a chaotic race to regain the lead in the Formula One drivers’ championship.

The seven-time world champion saw the Mercedes team doctor after the race, in which Alpine driver Esteban Ocon claimed the first win of his career.

After turning up late to the post-race press conference following his check-in with the medic, Hamilton said he feared he was suffering the debilitating long-term effects of coronavirus.

The 36-year-old contracted the disease last December, causing him to miss the Sakhir Grand Prix.

“I have been fighting all year with my health after what happened at the end of last year and it is still a battle,” said Hamilton on Sunday.

“I haven’t spoken to anyone particularly about it but I think it is lingering,” he said. “I remember the effects when I had it. The training has been different since then and the levels of fatigue you get are different and it’s a real challenge.

“So [I’m] just continuing to try and train and prepare the best way I can.

“Who knows what it is today? Maybe it’s hydration but I’ve definitely not had that experience.”

Hamilton said he had also suffered at the British Grand Prix last time out, saying: “I had something similar in Silverstone but this is way worse. I was having real dizziness and everything got a bit blurry on the podium.”

Mercedes team principal Toto Wolff said Hamilton had been sent to the team doctor after the race as a precaution, after he appeared overwhelmed on the podium.

“I think you can just relate to it with the heat out there and a race like he had with tons of overtaking,” Wolff said. “That is exhausting. I think he should be all right, but it is better to be safe than sorry.”

Ocon took the chequered flag ahead of Sebastian Vettel – who was later disqualified, bumping Hamilton up to second place.

The Formula One grid was tipped upside down after a chaotic first three laps that saw rain, crashes and strategic decisions that backfired.

The season resumes at the Belgian Grand Prix on 27-29 August.