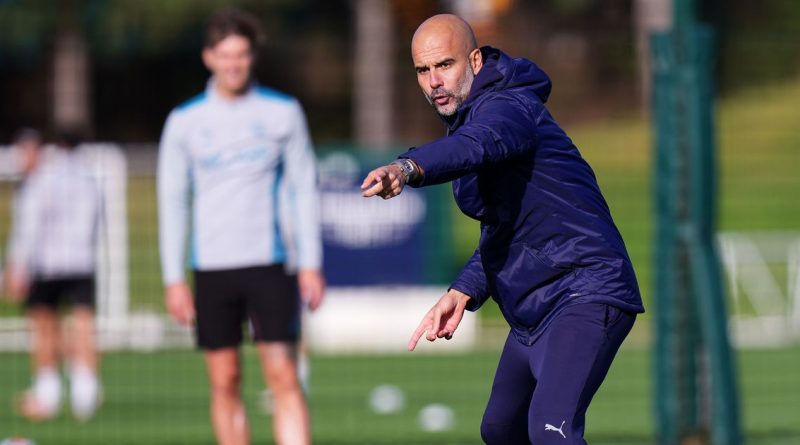 Manchester City boss Pep Guardiola will have been left purring by England‘s performances over the international break.

Although England could only muster a disappointing 1-1 draw with Hungary on Tuesday night, the Three Lions were made up of five Blues – with half of England’s outfield side at Wembley formed of City players.

Even England’s equalising goal was made in Manchester, with Phil Foden teeing up John Stones to salvage a point for Gareth Southgate‘s side.

At the tender age of 21, Foden has already established himself as a pivotal player for both club and country. Before the draw with Hungary, Foden ran the show in England’s 5-0 demolition of Andorra from a deeper role in central midfield.

And the Stockport-born magician is set to cap a stunning week by penning a bumper new six-year deal worth almost £50million to remain at the Etihad.

Guardiola regards Foden as City’s crown jewel and has previously labelled the star as “unsellable”. The Spaniard had already earmarked Foden as City’s new chief orchestrator in midfield long before David Silva wrapped up his decade-long album of enchantment last year.

Although it was only against Andorra, Foden showed Guardiola that he is ready to step up the mantle as City’s chief midfield creator – alongside England team-mate Jack Grealish.

Grealish’s record-breaking £100m switch to City this summer has already catapulted him to the forefront of Southgate’s musings, with the ex-Aston Villa starting three of England’s five games since his mega-money move to Manchester.

However, England’s clash with Hungary perhaps indicated that he’s not fully won Southgate over just yet.

Grealish was England’s best player on the night by a country mile. But the England chief still chose to withdraw him on the hour mark – a decision slammed unanimously by fans and pundits alike.

Despite Grealish’s continued international frustrations, are already signs that he’s immune from Guardiola’s famed and feared rotation policy at the Etihad – so it’s surely only a matter of time before the ball drops for Southgate, too.

HAVE YOUR SAY! Would you like to see Foden and Grealish as a central midfield pairing for Manchester City? Comment below

Both Grealish and Foden have competed for a spot in Guardiola’s front three, but after this international break, the City boss may be wondering if the smart move is to pair them up together.

Foden’s mature and dominant display last weekend already demonstrated his ability to thrive in a number eight role, and it was well documented in the build-up to Grealish’s arrival at the Etihad that Guardiola saw his future in a similar central role.

The prospect of the pair acting as an attacking double pivot in City’s midfield is tantalising.

The duo are both in a league of their own at City when it comes to driving play forward and taking on opponents and would offer a different option in that position than the likes of Ilkay Gundogan and Kevin De Bruyne.

With Guardiola also favouring De Bruyne as a false nine on occasions, it seems a lock that, should City wrap up their multi-year agreement for Foden, he and Grealish will form the foundation of City’s midfield for the foreseeable future.

It’s a combination that would certainly add another dimension to City’s meticulous build-up play – even with their continued striker woes.

The FA via Getty Images)

Pairing up them just ahead of Rodri in tandem number eight spots feels like the perfect way to fit in a pair of players who are both invaluable to Guardiola for different reasons.

Academy graduate Foden has long been groomed for the throne as the main man at the Etihad, whilst no outfield player has been utilised more by Guardiola than £100m man Grealish this term.

The technical ability of that duo ahead of the rock-solid Rodri would certainly be an intriguing experiment.

And if there’s any Premier League manager who has shown a willingness to experiment in order to accomplish greatness, then it’s undoubtedly Guardiola.