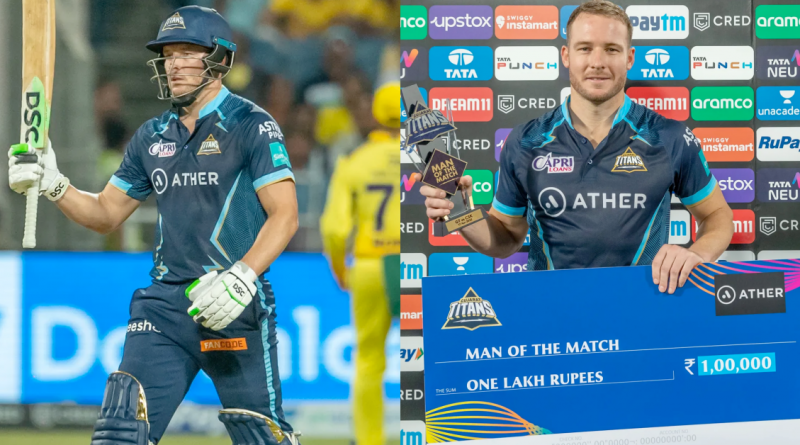 David Miller played a blinder. He scored 94 runs off 51 balls and took Gujarat Titans over the line against Chennai Super Kings. Miller was declared the Player of the match for his effort. In the post-match presentation, Miller admitted that his innings took him down memory lane when he scored a fantastic century playing for Kings XI Punjab in 2014.

Miller almost single-handledly won the game for GT as other batters struggled to get going.

Rashid Released A Lot of Pressure In The End: David Miller

Gujarat was chasing 170 runs. They lost early wickets as they were 16-3. Miller came out to bat in a tricky situation, but he got going from the beginning itself. On one end he was playing his shots but on the other hand, GT kept on losing wickets. They were 78-5 at one stage. They looked like they were completely out of the game as the required run rate was close to 12-13 runs per over at one stage.

But then walked in Rashid Khan, who was captaining the side in the absence of Hardik Pandya.

Rashid Khan scored 25 runs in the 18th over against Chris Jordan and brought his side right back into the game. His cameo of 40 runs in 21 balls helped Miller immensely.

“Needed someone to help out at the back end. Exceptional over, in my opinion, that over was the game-changer and he struck it beautifully”, Miller said on Rashid Khan’s batting.

On his batting, he said: “I have been really working hard on my fitness. It does take me back to memory lane [referring to the innings he played for KXIP vs RCB in IPL 2013], it was sort of playing my game, see the ball hit the ball, with the rate already quite high, I wanted to express myself. It came off tonight and pretty chuffed with the innings.”

Getting in with the position at 16/3 gives me an opportunity to shine, doesn’t happen too often but when the ball was new it helps.” David Miller added.

David Miller has been in good touch as he helped Gujarat finish brilliantly in the last game and now he has helped his side get over the line. GT would hope he continues the same way going ahead.