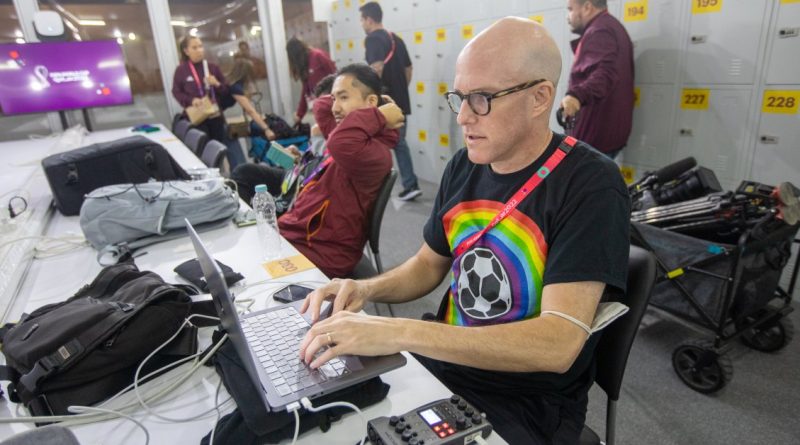 
In 1998, when American soccer journalist Grant Wahl covered his first World Cup, at 24, for Sports Illustrated, soccer was seen as a sort of a JV beat at America’s most influential sports publication. While most young writers of his generation yearned to cover more established U.S. sports like baseball, basketball or football, Wahl— who died on early Saturday, while covering the World Cup in Qatar, at 49 years old, had fallen in love with the game. He foresaw a global beat he could own. And in the process, he helped elevate a game, cherished around the world but long dismissed in America, to once unimaginable heights in the States.

“For much of its history, Sports Illustrated, like most major media companies, had been pretty dismissive of soccer,” says former Sports Illustrated editor-in-chief Chris Stone, now a deputy managing editor at the Los Angeles Times. “A lot of people ride the wave of a sport’s popularity. Grant really helped create a great deal of the popularity around soccer in this country.”

Wahl’s untimely death in Qatar, where he was writing daily World Cup stories for his own subscription website on Substack, shocked the soccer world. Wahl collapsed in the press box during extra time of the Argentina-Netherlands match on Saturday, and died in a Qatar hospital. Wahl was working around-the-clock in Qatar and had been sick during his time there. “My body finally broke down on me,” he wrote on Dec. 5. “Three weeks of little sleep, high stress and lots of work can do that to you. What had been a cold over the last 10 days turned into something more severe on the night of the USA-Netherlands game, and I could feel my upper chest take on a new level of pressure and discomfort. I didn’t have Covid (I test regularly here), but I went into the medical clinic at the main media center today, and they said I probably have bronchitis. They gave me a course of antibiotics and some heavy-duty cough syrup, and I’m already feeling a bit better just a few hours later. But still: No bueno.”

“I’m coughing a lot,” Wahl also said in a podcast before he died. “It sounds like a death rattle sometimes.”

Wahl said he caught up on some sleep during the two-day break between the Round of 16 and the quarterfinals.

Wahl aggressively covered the struggles of Qatar’s migrant workers. “They just don’t care,” read a Dec. 8 sub-headline on Wahl’s Substack website. “Qatari World Cup organizers don’t even hide their apathy over migrant worker deaths, including the most recent one.” Before the United States’ opening World Cup game against Wales on November 21, Wahl wrote that security staff detained him at Ahmad bin Ali Stadium for wearing a rainbow shirt, in support of the LGBTQ+ community. Homosexuality is criminalized in Qatar. He was eventually granted access to the game, and Wahl said FIFA apologized. He wore the shirt in media center.

Stunned reactions poured out worldwide. “We offer our deepest condolences to Grant’s family, friends and his many close colleagues in the media,” a spokesperson for Qatar’s The Supreme Committee for Delivery & Legacy wrote in a statement. “We are in touch with the US Embassy and relevant local authorities to ensure the process of repatriating the body is in accordance with the family’s wishes.” FIFA noted Wahl had recently been honored, along with other journalists, for covering eight straight men’s World Cups. U.S. Soccer confirmed Wahl’s untimely passing. “Here in the United States, Grant’s passion for soccer and commitment to elevating its profile across our sporting landscape played a major role in helping to drive interest in and respect for our beautiful game,” U.S. Soccer said in a statement. “As important, Grant’s belief in the power of the game to advance human rights was, and will remain, an inspiration to all.”

“I am so thankful for the support of my husband @GrantWahl‘s soccer family & of so many friends who’ve reached out tonight,” Wahl’s wife, noted epidemiologist Céline Gounder wrote on Twitter. “I’m in complete shock.”

Wahl grew up in the Kansas City area, and attended Princeton University. For his senior thesis, he spent a summer in Argentina studying the political culture of soccer teams. Wahl excelled as a sportswriter at the Daily Princetonian, his preternatural talent clear to anyone reading his coverage of Princeton’s soccer and basketball teams. (I was one of those awed readers, as a student two years younger than Grant). “Long after Pete Carril leaves the coaching profession, last night’s scene here will remain imprinted in the national consciousness,” Wahl wrote, in his senior year, about Princeton basketball’s now-famous upset win over UCLA in the 1996 NCAA basketball tournament. Princeton was led by Carril, the school’s irascible, diminutive coach who passed away in August. “Here was Carril, college basketball’s rural church mouse, scurrying about in some postmodern, ethereal dome, outcoaching the 1995 Coach of the Year, UCLA’s Jim Harrick.”

After college, Wahl turned down an offer from the Miami Herald for a fact-checking job at Sports Illustrated. But he quickly rose through the writing ranks, and was assigned to his first World Cup just two years after college graduation. For many years, Wahl split his time between soccer and college basketball. In 2002, he even wrote SI’s first LeBron James cover, headlined “The Chosen One.” (James was a high school junior when the piece came out).

“He was always pretty cool to be around,” James said on Friday night. “He spent a lot of time in my hometown of Akron covering me over the course of time before that cover story came out. And I’ve always kind of watched from a distance. Even when I moved up in the ranks and became a professional and he kind of went to a different sport and things of that nature over the years, anytime his name would come up I would always think back to me as a teenager and having Grant in our building down at [St. Vincent-St. Mary High School]. So, it’s a tragic loss. It’s unfortunate to lose someone as great as he was and I wish his family, like I said, the best. And may he rest in paradise.”

Around 2010, Wahl convinced Sports Illustrated’s editors to let him cover soccer full-time. “For Grant, there was something about the sport and the internationalism and the excitement of a rocket ship about to take off,” says his long-time Sports Illustrated colleague L. Jon Wertheim. “For Grant, when the game started, it was the least interesting time. It was everything surrounding it—the politics and the force of good and the corruption. It was this prism for humanity.”

He built an enviable following, of nearly 855,000, for example, on Twitter, covering the game from all angles. He wrote profiles and books about the stars, like David Beckham and Leo Messi, while also sharing with readers stories of being robbed at gunpoint in Honduras and running for president of FIFA. Besides writing cover stories for Sports Illustrated, he worked in television, for Fox Sports and more recently, CBS Sports. In 2020, Wahl and Sports Illustrated parted ways under less than amicable circumstances, but Wahl went out on his own, building his subscription website into a must-read for any halfway serious soccer fan.

It’s not a coincidence that, for example, while Wahl’s career took off, Americans could watch Saturday Premier League Games on NBC, or began to follow the U.S. women’s team with great intensity. As the most prominent soccer reporter in America, he sparked interest in the machinations of international club teams, and analyzed the women’s game with the same care he did on the men’s side.

“He always covered the game with a conscience,” Leeds United coach Jesse Marsch tells TIME, through tears, after hearing about Wahl’s death. Marsch met Wahl in the winter of 1994, while they were stuck in the Princeton infirmary, watching the Lillehammer Olympics together. Wahl covered Marsch throughout his career in Major League Soccer, and his coaching stops in the U.S. and overseas. “He tried to talk about the women’s game as much as he talked about the men,” says Marsch. “He talked about the important topics, like the fight for LGBTQ rights, up until his death. He was aware that it’s a global game and knew how important it is to treat it as such. He did it with a heart, he did it with integrity. He did it the right way.”

Wahl always made time to give back, whether it was speaking to journalism classes, or mentoring young reporters looking to follow in his footsteps. He singlehandedly elevated American soccer reporting. Those who follow Wahl can only try to meet his standard. “The one thing you can never say about Grant, was that he didn’t care,” says one of Wahl’s mentees, ESPN soccer analyst Luis Miguel Echegaray, who worked with Wahl at Sports Illustrated. “He cared so deeply, not just about the sport, but what the sport can do to communities. And that’s so deep, because we live in a day and age where everybody’s just about clicks. He didn’t give a shit. And that to me is the most important thing. We will never have another Grant Wahl.”

The original version of this story misstated Grant Wahl’s age at the time of his death. He was 49, not 48. Wahl was 24 when he covered his first World Cup in 1998.