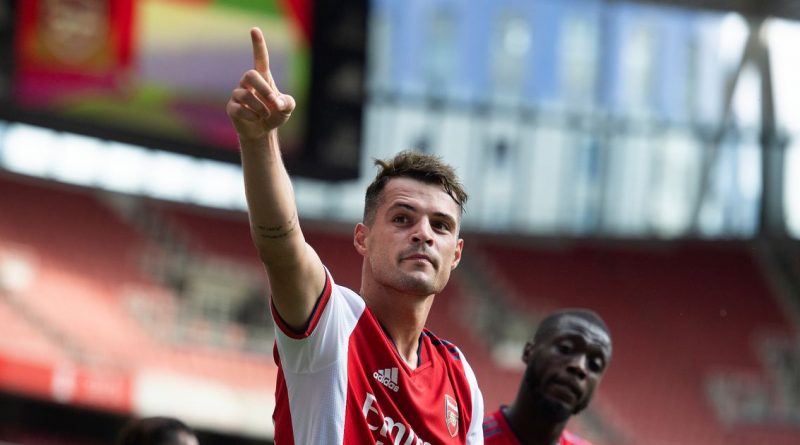 The midfielder had been linked with a move away from the Emirates this summer, but in a dramatic change of events he let the fans know exactly where his loyalty lies

Granit Xhaka has ended speculation that he is set to leave the club after he said it felt ‘good to be home’ following his return to the Arsenal line-up.

The midfielder had been linked with a move away from the Emirates this summer, but in a dramatic change of events he let the fans know exactly where his loyalty lies.

The Swiss international made his first appearance since returning from Euro 2020, and scored Arsenal’s only goal during a 2-1 pre-season defeat to London rivals Chelsea.

Xhaka had a brilliant summer with Switzerland, producing one of the performances of the tournament as his side knocked out France in the round of 16 before losing to Spain, and will play in London this season despite the summer speculation.

After Sunday’s friendly defeat to Chelsea, Xhaka posted a message to the Arsenal fans on his Instagram and said: “It felt really good to be home. #Xhaka #Arsenal #GX34.”

Xhaka had been heavily linked with a move to AS Roma this summer, who are now managed by ex-Tottenham boss Jose Mourinho.

Mourinho had identified the former Borussia Monchengladbach ace as one of his main transfer targets this window, but Roma would need to sell before tabling a bid for the Swiss midfielder.

It was thought that Mikel Arteta could be tempted into a sale after already spending a combined £75million on Ben White, Nuno Tavares and Albert Sambi Lokonga, but the Arsenal boss has now reiterated that Xhaka is not for sale.

Following Sunday’s pre-season encounter, Arteta confirmed that Xhaka will not be allowed to leave as he said: “Granit is going to be staying with us.”

Should Arsenal sell or keep Granit Xhaka? Comment below

The Spaniard added: “He’s a player that we value so much, he’s a key member of our squad.

“He wanted to play today and I think it’s very clear coming from his side that he wants to be here.”

Fellow Arsenal midfielder Thomas Partey was forced off with an ankle injury at the weekend which may have further tightened Arteta’s grip on Xhaka as the season draws ever closer, with uncertainty over the future of Joe Willock, who is in demand.


Xhaka could play a key role in the centre of Arsenal’s midfield this season, and with no European football to focus on, it could be a successful year ahead for the Gunners, who are still looking to do business in this transfer window.

Arteta is still desperate to bring in another creative midfielder after Martin Odegaard’s loan spell expired, and goalkeeper Aaron Ramsdale is still on their radar, but Arsenal would need to sell to create more funds for new signings.