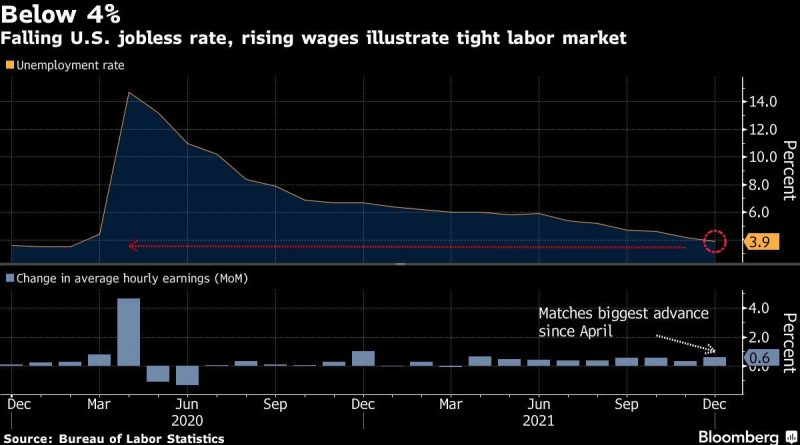 The Federal Reserve will likely raise interest rates four times this year and will start its balance sheet runoff process in July, if not earlier, according to Goldman Sachs Group Inc.

“We are therefore pulling forward our runoff forecast from December to July, with risks tilted to the even earlier side,” Hatzius said. “With inflation probably still far above target at that point, we no longer think that the start to runoff will substitute for a quarterly rate hike. We continue to see hikes in March, June, and September, and have now added a hike in December.”

In its December meeting minutes, Fed officials signaled they are preparing to move quicker than the last time they tightened monetary policy in a bid to keep the U.S. economy from overheating amid high inflation and near-full employment. These conditions — along with a larger balance sheet that’s suppressing longer-term borrowing costs — “could warrant a potentially faster pace of policy rate normalization,” the minutes said.

Officials also saw the timing of reducing the $8.8 trillion balance sheet as likely “closer to that of policy-rate liftoff than in the committee’s previous experience,” according to the minutes.

The U.S. unemployment rate fell below 4% and wages jumped last month, adding to evidence of a tight labor market.

Goldman’s forecast for the terminal funds rate in unchanged at 2.5%-2.75%.

“Even with four hikes, our path for the funds rate is only modestly above market pricing for 2022, but the gap grows significantly in subsequent years,” Hatzius wrote.