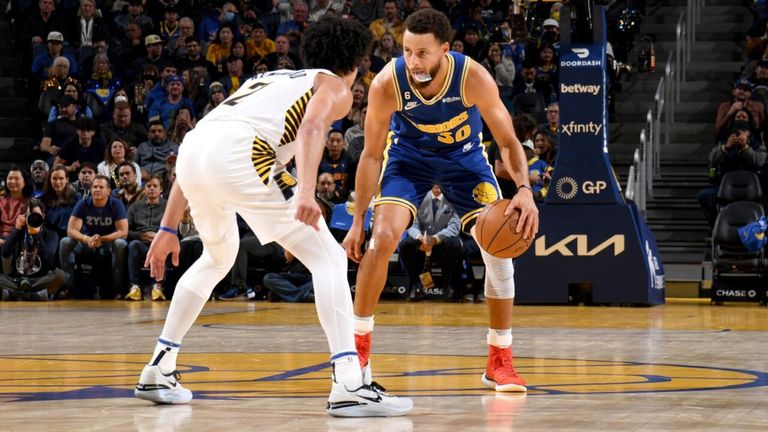 
It might not seem the most entertaining of clashes, but there will be more than an element of intrigue when the Golden State Warriors face the Toronto Raptors this Sunday, live on Sky. Both teams are in need of a win, and yet neither puts up a convincing narrative that they can claim it.

It doesn’t help their current woes on the road, but the Warriors’ injury list might be longer than the defending champions ever expected it to be.

The latest, and perhaps most concerning addition to the list is Stephen Curry. The Dubs’ talisman left during the fourth quarter of the 125-119 defeat to the Indiana Pacers on Wednesday night after injuring his left shoulder.

Coach Steve Kerr stated: “He’s going to get an MRI tomorrow. So, you know, he was ruled out, you know, midway through the fourth. Training staff told me he wasn’t going to play the rest of the night. And we’ll see. We’ll see how he is tomorrow.”

Joining him is Klay Thompson, who is currently going through injury management, Andrew Iguodala, side-lined with a hip problem, and Andrew Wiggins, who has been ruled unavailable this week due to an ongoing groin issue.

Draymond Green was ejected in the fourth quarter, and his involvement in this weekend’s game, could be pivotal.

This leaves the Warriors very stretched when it comes to first-team picks, and you can expect Jordan Poole, who has been in good form of late, and Andrew Wiseman, returning from his stint in the G-League, to start.

If Curry is unable to start at all, then this puts another strain on Kerr’s choices, offering the Raptors more of an opportunity to do what the Pacers did in their midweek victory.

Winning one week against the Los Angeles Lakers, being swept aside by the Sacramento Kings the next, in a game where the Kings dominated after the first quarter. That’s been the story of the Raptors’ season so far.

Even within that defeat, there were plenty of opportunities to rack up the points, and any defensive structure would’ve halted the Magic’s rampant scoring. Instead, it was left to Fred VanVleet, who scored a season-high 39 points, to pick up the pieces.

Scottie Barnes could only contribute with 27 points, while Pascal Siakam added 19. The Kings shared the points much more amicably, making a slender 124-123 win much more commanding. It was a defensive-dismantling display.

On top of that, the Raptors didn’t turn the ball over in the first half, just the second time in franchise history they’ve done that.

Even with the Warriors being so depleted, there’s more than enough disarray in Toronto’s defensive setup to suggest that Poole and Co could make light work of this team.

3) Battle of the bad

Both these teams are looking to climb the Conference standings, the Warriors more so into playoff seeds than the Raptors. Both are also rife with defensive weaknesses, issues with individual players, as well as questionable matchups in possible backup players.

For Kerr’s side, they made it all too easy for the Pacers to achieve victory, led by Benedict Mathurin who had only recently returned from injury, but didn’t have to strain himself for his 24 points.

The Raptors, however, have proved that they are vulnerable to high-scoring attacks, and more concerningly, unable to respond with their own. Indeed, in the defeat to the Magic, Toronto shot 6-for-21 from three-point range, matching their fewest three-pointers of the season (reminder: they also conceded 50 points in the opening 12 minutes).

It really is a battle of the bad, of the problems that continue to curse and dampen both these sides. Any action from Curry should elevate the Warriors into winning position, but perhaps Poole and Wiseman, and maybe even Jonathan Kuminga, might be able to prove to their coach why they deserve to be more than just rotation guys.