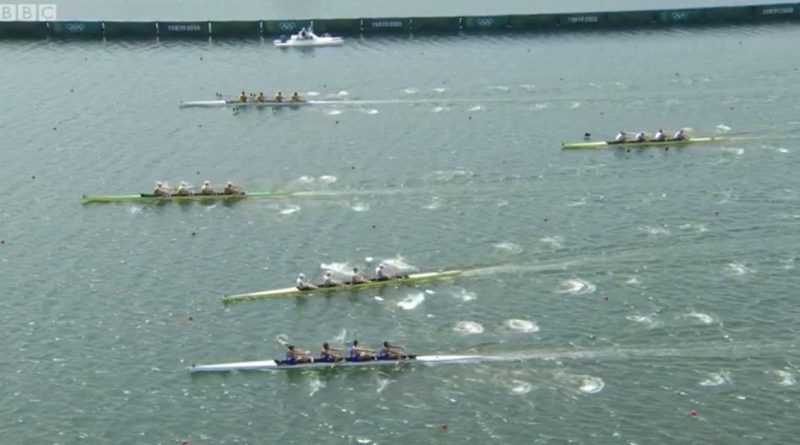 
“It’s an outdoor sport and this stuff happens. It’s just heartbreaking when it’s you and not something on Youtube”

Britain veer off line and almost crash into Italy as men’s coxless four miss out on gold for first time in 25 years.

In the end the weight of history proved too much for Britain’s most celebrated rowing boat.

The hopes of men tasked with steering it to a sixth consecutive Olympic gold sank without trace.

On a hot, blustery morning in Tokyo a dynasty without equal in British sport met a sorry and spectacular end.

The men’s coxless four had carried Steve Redgrave and Matt Pinsent to knighthoods during a 21-year unbeaten voyage.

But having ruled the waves in Sydney and Athens, Beijing, London and Rio, it veered so far off course here that it not only missed the podium, it took out a rival boat.

In the immediate aftermath a tearful Ollie Cook accepted responsibility for the runaway vessel.

“I’m responsible for the steering. I screwed up,” he said. “I forgot the steering a little bit and that cost us a medal.”

His forlorn state offered an insight as to the pressure he, Matt Rossiter, Rory Gibbs and Sholto Carnegie had felt in possession of this golden craft.

“There’s no sugarcoating it – we’re absolutely devastated,” Rossiter said. “You like to put your head on the pillow and feel proud and think you’ve done your best. But we really screwed up there at the finish.

“We fully biffed into the Italians. They are pretty pissed off because maybe we cost them the silver and we’re sorry to those guys.

“It’s an outdoor sport and this stuff happens. It’s just heartbreaking when it’s you and not something on Youtube.”

Rossiter had come into the Games questioning the support offered by Fab Four greats of yesteryear James Cracknell and Pinsent.

“Sometimes there’s a feeling the Cracknell/Pinsent generation kind of revel in the team not performing as it should,” he had claimed.

It clearly still bugged him as the gold medals were handed to Australia.

“You can look back on life with rose-tinted glasses, like Roy Keane would rather United didn’t win the league the year he finished,” he said.

“It’s just disappointing that those people will probably be really smug now that they are part of the legacy that won.”

Cracknell’s blunt assessment was that one of the four had “blown” and he pointed a finger at the decision to select four rookies – and replace legendary coach Jurgen Grobler a year out from the Games.

“A question,” he asked. “Would that race have been different if there had been, as there has been with every Olympics since 2000 onwards, one member of the previous crew that had won?

“That was as much inexperience as physiological for the British crew.”

Whatever the true reason, Dame Katherine Grainger admitted she could not think of the last time a boat had lost control at elite level.

“Sometimes it means somebody in the crew has gone beyond the point of physically coping so the boat can’t steer straight,” she said. “Sometimes it’s a problem with the steering itself.

“But to go that dramatically off at the end something’s happened, at that point your boat’s out of control and that is quite a frightening thing.”

Matt Rossiter: Being as oar-some as Fab Fours of yesteryear is THE ultimate challenge
Helen Glover out to change way women think forever by winning third Olympic title

For the men’s four looking on, it was a vision of what might have been.