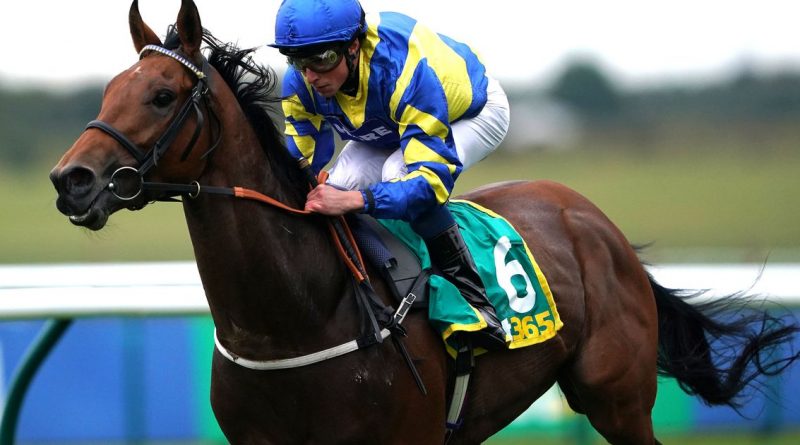 TRUESHAN backers have no grounds for concern in the Group 1 Al Shaqab Goodwood Cup (3.35) as Glorious Goodwood 2021 gets underway today.

Hollie Doyle’s mount was a last-minute defector from the Gold Cup at Royal Ascot last month after the forecast rain stayed away.

But a deluge of downpours on Sunday has turned the Goodwood terrain to the easy side of good – and that’s tailor-made for the Alan King-trained stayer, who gets the vote to thwart four-time victor Stradivarius.

Newsboy’s top tips for day one…

MIGRATION is hard to get away from after a most promising return to action at Salisbury last month.

Despite having been off games for 641 days, the David Menuisier-trained gelding was backed into 4-1 favouritism for a 12-runner handicap over a mile.

Migration didn’t net the money – but gave the strong impression his backers would get their money back with interest in the near future.

Travelling with ease at the back of the field, the son of Alhebayeb and Silvestre de Sousa – who makes way for William Buick – found their path blocked when attempting to make ground inside the final two furlongs.

Once finding clear water, Migration came home with gusto to take fourth, beaten a length and a half, to Johan, with Ouzo fifth.

A 1lb nudge up the weights is neither here nor there for this lightly raced five-year-old, who has won at eight and 10 furlongs and has more to offer.

Maydanny won this last year and must enter calculations, along with It’s Good To Laugh and Bell Rock.

BERKSHIRE SHADOW is expected to take his career tally to three wins from as many starts.

The Andrew Balding-trained youngster made a winning racecourse debut when overcoming greenness to score by half a length at Newbury in mid-April, before going on to Royal Ascot 60 days later.

Oisín Murphy’s mount, an 11-1 chance for the Group 2 Coventry Stakes, came with a strong run from the back to beat Eldrickjones by a length and a quarter.

The way Berkshire Shadow came home that afternoon suggests that the step up from six to seven furlongs will see him in an even better light.

And although my selection has yet to tackle ground as soft as he will encounter today, the fact that he’s a son of Dark Angel raises expectations that he will cope with the prevailing conditions and defy a 3lb penalty for his Coventry Stakes success.

Lusail, who had Eldrickjones just under three lengths back in fifth when capturing the Group 2 July Stakes at Newmarket, is feared most, while The Acropolis is capable of taking home the bronze medal.

CREATIVE FORCE gets the verdict over his stablemate – and reigning champion – Space Blues in a race where the trophy is surely destined for Charlie Appleby’s mantelpiece.

Returning from a 300-day lay-off, Dubawi’s son – gelded while on the sidelines – laughed at a handicap mark of 89 at Newmarket’s Craven meeting in April, following up from an 8lb higher rating on the same track’s 2,000 Guineas undercard at the start of May.

Creative Force proved his effectiveness on rain-softened terrain with a three-length score in Newbury’s Listed six-furlong Carnarvon Stakes a fortnight later, before beating his stable-companion Naval Crown by a length and a quarter when upped to seven for the Group 3 Jersey Stakes at Royal Ascot in June.

Get the latest Goodwood odds from Grovesnor Sport

The winning run came to an end with a two-length fifth to Starman in the Group 1 July Cup 17 days ago, but going down in class and back up in distance should serve to get Creative Force back to winning ways.

Irish raider Real Appeal is another to throw into the mix.

TRUESHAN has the ideal conditions to deny Stradivarius a record straight fifth victory in the Goodwood Cup.

It is two years – all bar a few days – since Alan King’s five-year-old marked the second start of his career with a short-head margin in a mile-and-a-half novice stakes at Wolverhampton.

Since then, Trueshan has done nothing but improve, showing himself suited by a distance of ground with some cut in it en route to six wins on turf – the last of the sextet a seven-and-a-half-length romp under Hollie Doyle when attempting two miles for the first time in the Group 2 QIPCO Long Distance Cup at Ascot in October.

Trueshan’s reappearance run, a three-quarter-length defeat when attempting to concede 5lb to Japan in the Group 3 Ormonde Stakes at Chester in May, appeared the perfect tee-up for a Gold Cup challenge at Royal Ascot.

In the event, rain forecast for the royal heath didn’t materialise and Doyle’s partner was scratched from Ladies’ Day – but weekend downpours in West Sussex were just what the doctor ordered and Trueshan can leave behind his sixth in the Northumberland Plate at Newcastle last time to register a first Group 1 triumph.

Grovesnor Sport have a PRICE BOOST on Stradivarius

Stradivarius went off the 10-11 favourite for the Gold Cup but failed to sparkle in finishing fourth to Subjectivist, with Spanish Mission in third, Emperor Of The Sun fifth, Nayef Road sixth, Santiago seventh, Serpentine eighth and Amhran Na Bhfiann 11th.

The absent Subjectivist’s stablemate Sir Ron Priestley was all heart to land the Group 2 Princess Of Wales’s Stakes at Newmarket 19 days ago and should be in the firing line.

SUNDAY SOVEREIGN is without a win since his two-year-old days – but he’s proven on a rain-softened playing surface and features on a workable mark.

There has been more than the odd bump in the road since, on the back of stylish wins at the Curragh and Tipperary, Sunday Sovereign – then trained by Paddy Twomey – finished eighth to A’Ali as the 13-8 favourite for the 2019 Norfolk Stakes at Royal Ascot.

The son of Equiano joined Tim Easterby after just one outing for Roger Varian, and showed there’s still a spark in there with a three-quarter-length second to Pendleton on soft ground at York in May.

There have been hefty defeats at Newcastle and Ascot in two attempts since, but Silvestre de Sousa’s mount has dropped 2lb down the weights as a result and is taken to outrun his odds.

There are myriad possible outcomes to this wide-open sprint handicap, with Lord Riddiford, Blue De Vega and the veteran Pettochside all capable of playing a role.

SCATTERING showed enough on his Newcastle debut to suggest he would be a force to be reckoned with next time.

Sent off at 7-1 in a field of eight for a five-furlong novice event at the end of June, the William Haggas youngster kept on well – without having the kitchen sink thrown at him – to take third to Catch Cunningham.

That was a nice start and Tom Marquand’s mount should take a big step forward with that experience under his belt.

City Runner and Monet’s Sunrise can make the podium.

The Richard Hannon-trained grey is bred to be good, being a daughter of the Guineas winners Frankel and Natagora.

And, after making a successful reappearance in a one-mile novice stakes at Haydock Park in April, Anghaam was back in the winner’s enclosure following a handicap over the same trip at Newmarket’s July Course at the end of last month.

A third of four at the latter venue 11 days ago was a second defeat from two tries over 10 furlongs for Jim Crowley’s mount, so coming back in distance looks very much the right move for a filly whose pedigree suggests she will cope with easy ground.

Riknnah and Pomelo are entitled to respect as they bid to bounce back from last-time-out losses, and a good show from Nebulosa would be no great surprise.

GELLHORN has won her last two races at six furlongs and looks sure to give another good account.

The daughter of Showcasing made it third time lucky since leaving Lamorlaye-based David Smaga for Stuart Williams with a short-head margin at Newmarket in mid-June.

Marco Ghiani’s mount didn’t reproduce that effort over the minimum trip at Headquarters next time but, back at six, beat Lovely Breeze with authority – Crazy Luck was fourth – there 11 days ago.

The runner-up reopposes on 4lb better terms for a one-and-a-quarter-length beating but Gellhorn, proven on softer ground when trained in France, is taken to stay in front.

Isabella Swan beat Lovely Breeze over course and distance on her penultimate start and remains of interest despite a defeat at Bath last time.