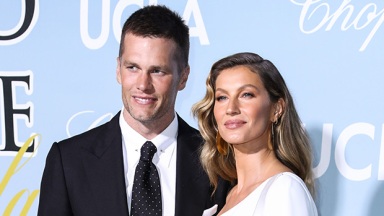 
“Let’s go @TomBrady,” Gisele Bundchen tweeted on Sept. 11. “Let’s go Bucs!” She completed her message with three sparkling emojis, showing unity with her husband, Tom Brady, ahead of his first NFL game of the 2022 season with the Tampa Bay Buccaneers. Gisele’s supportive message comes amidst rumors that there’s “tension” in her marriage with Tom following his decision to un-retire from football earlier this year.

“Gisele did her best to adjust to Tom’s decision to go back [to the NFL], but it hasn’t been easy for her because that wasn’t their agreement,” a source recently told HollywoodLife. “She’s a very supportive wife, but she also speaks her truth, so there’s been a lot of tension since he went back.” Amidst the issues, Gisele left the family home in Florida to spend some time in Costa Rica. She returned to Tampa ahead of the 2022 NFL season, but did not attend Tom’s away game in Dallas. However, the model’s tweet in support of her husband spoke volumes as both stars have kept tight-lipped about reports of marital issues.

Tom announced his decision to retire from football at the beginning of Feb. 2022. After playing for the New England Patriots for 20 seasons and winning six Super Bowls, Tom was traded to the Tampa Bay Buccaneers in 2020. He led the team to a Super Bowl in 2021 during his first season on the team. After another playoff run that didn’t result in a championship ring in 2022, Tom decided to end his football career to focus on his family (he has two children with Gisele, as well as a teenage son with ex, Bridget Moynahan).

However, less than two months after the retirement, Tom revealed that he was coming back for another season with the Bucs. At the time, Gisele seemed supportive of the decision. “Here we go again!” she commented on his Instagram announcement post. “Let’s go lovvvey! Let’s go Bucs!”

Leonardo DiCaprio: All Of His Girlfriends From Camila Morrone To Gisele Bundchen