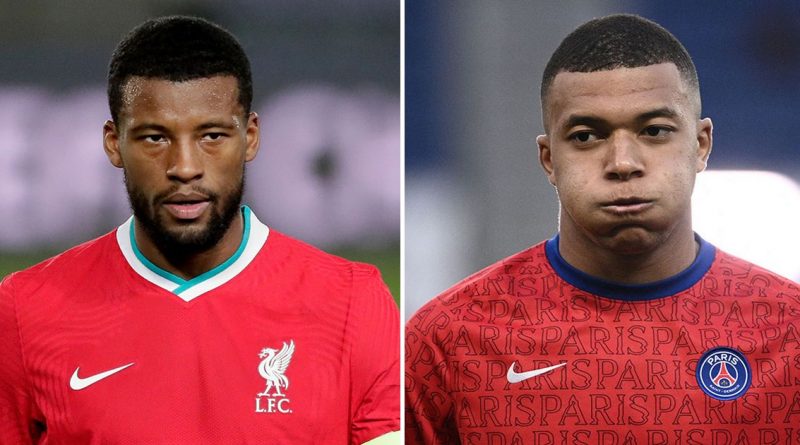 Georginio Wijnaldum has given Paris-Saint Germain superstar Kylian Mbappe some advice amid links of a transfer to Liverpool.

The 30-year-old recently joined the French giants after leaving Anfield on a free in June, ending his five-year stay.

Wijnaldum’s new team-mate, 22-year-old sensation Mbappe, continues to be linked with a switch to Merseyside as Jurgen Klopp bids to reshape his aging forward line.

The France international cost PSG a reported £130.5 million to sign from Monaco after he lifted the World Cup with his nation in the summer of 2018, following an initial season on loan in the capital.

With his contract set to expire next summer and concerns in Paris that he may not extend his deal, transfer speculation has unsurprisingly increased despite a disastrous Euro 2020 campaign for the star.

Soon, Mbappe will return to pre-season training with his club but Wijnaldum has not waited to lend him some words of wisdom.

Speaking to RMC, via Goal, the former Liverpool midfielder said: “Everyone wants Mbappe to stay, starting with me because he is one of the reasons that made me come to PSG, to play with players like him.

“I was already very happy to see that Neymar had extended.”

The Brazilian winger recently committed his future to the Parisians, ending talk of a shock return to Barcelona.

But it’s Real Madrid who have mostly been tagged as interested in Mbappe, alongside the Reds.

Wijnaldum and Mbape both crashed out as favourites in their respective round-of-16 matches at the European Championships, with latter infamously missing the decisive penalty as the world champions lost to Switzerland in a dramatic shootout.

Referencing his own summer move, the Dutchman advised the young talent to trust his emotions regarding his next step.

“I’ve been in that position too and most of the time you follow your feelings,” explained the Netherlands international.

“I just hope his is go to PSG because the club are doing their best to make this team the best in the world.”

The pair are set to be key cogs for Mauricio Pochettino this season as he bids to return the Ligue 1 title to Paris, as Lille shockingly claimed the title last term.

And while Wijnaldum wants one Frenchman to stay and snub the Premier League, he also wants one from the English top-flight to come to Paris.

Is Mbappe the player Klopp needs to lead his forward line for years to come? Comment your thoughts below.

Manchester United’s Paul Pogba has been heavily linked with a switch, with reports hotting up after he rejected a £350,000-a-week contract offer at Old Trafford.

Set to leave for free next summer if he doesn’t renew his deal, ‘Gini’ wants the 28-year-old to head across the channel.

Wijnaldum said of Pogba: “He is amazing, I have played against him several times and what a fabulous player!

“If you ask any player from another team if he would like Pogba to join him, everyone will say yes because he is an extraordinary player, full of qualities.”

The dynamic midfielder continued to praise his positional counterpart, saying: “He’s got everything.

“He’s one of the best midfielders in the world. We need all the players for a season,” he stressed.

“I would love to have Paul Pogba with us here because he’s a superb player.”

If PSG stump up United’s mooted asking price of £50 million, Wijnaldum could get at least one of his wishes.