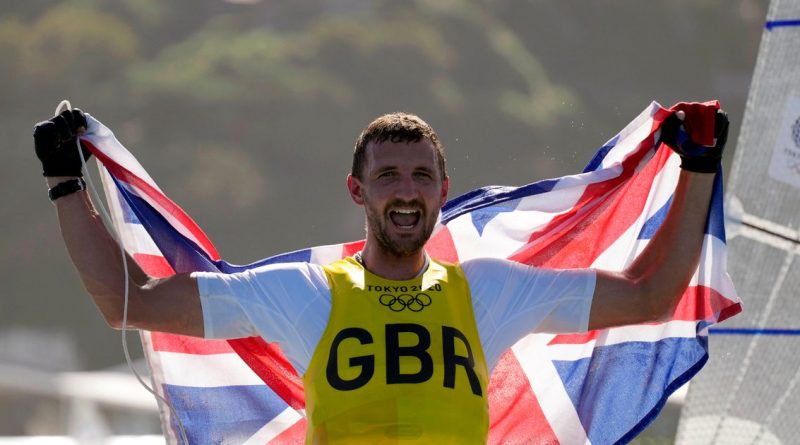 “Absolutely no doubt that’s the greatest pressure I’ve felt in my career. That was mine to lose”

Scott: “I’ve never been involved in any form of boat race as close as that” (

As he clutched his gold medal Giles Scott said he had never known pressure like it.

Along the boardwalk he was being hailed as “the king” of Britain’s sailing team. Sir Ben Ainslie paid tribute to “how cool under pressure” he had been.

He had just retained his title in the Finn class to complete an Olympic golden hour without equal for Britain’s yachties.

He had watched Stuart Bithell and Dylan Fletcher deliver the nation’s first ever win in the 49ers class – then gone out and replicated it.

Soon after, John Gimson and Anna Burnet followed him back into Enoshima harbour with a silver medal in the mixed Nacra 17 class.

Britannia ruling the waves? You bet.

Yet what made yesterday so incredible was not the achievement so much as the manner in which it was achieved.

With 20 metres left in his race Scott was in silver medal position. With 10 metres to go in theirs, the 49er boys were too.

“That was mine to lose. I got there, but only just. I’ve never been involved in any form of boat race as close as that. I made it by the skin of my teeth.”

V for victory: A relieved Scott after retaining his Finn title
(

The reigning champ had won six of the previous seven races, putting himself in the position he dreamt about as a kid when wanting to be the next Ainslie.

It meant he would need the calamity of a false start and to finish outside the top five in the medal race if he was to blow it.

Yet when the hooter sounded in Sagami Bay he twitched on the start line and fearing he might be pinged for going too early doubled back and started again to avoid the chance of penalty.

That left him at the back of the fleet, like Lewis Hamilton after an unscheduled early pit stop, playing catch-up for the rest of the race.

With 100m to go he lay sixth and up ahead his biggest rival Zsombor Berecz was crossing for the win. With 50m left his position was unaltered.

The weight of history bore down on him. Britain’s monopoly of the gold medal since 2000 was moments from ending.

Scott with his gold medal after successful Finn title defence
(

His mind flashed back to the finish of the previous race and the way Bithell and Fletcher powered from nowhere to pip the Germans on the line.

He grabbed hold of his boat and in a heart-stopping finale somehow found a way to muscle it past Turkey on the line.

Scott, 34, would later tell of his pride in maintaining Britain’s monopoly of a Finn class which is being retired from the Olympics after these Games.

“To follow legends like Iain Percy and Ben Ainslie, my heroes growing up, yeah, so proud,” he said. “That’s six in a row for Britain in the Finn. We own it.”

Bithell summed it up best, describing Scott as “incredible” for the way he exerted his will on the race in Ainslie-esque fashion.

“Giles is a super chilled guy but a very, very talented sailor,” he said. “He’s the Big Man, the king of our team.”