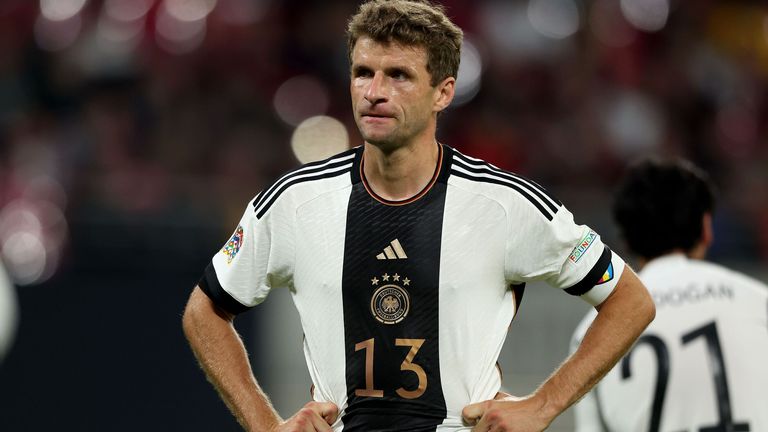 
Hungary stunned Germany with a 1-0 win courtesy of Adam Szalai’s sensational heel flick on Friday to stay on course for a Nations League final four spot with one game left to play.

The 34-year-old Hungary captain, who will end his international career after their last League A-Group 3 game against Italy on Monday, raced to the near post and flicked the ball into the net with his heel from a corner in the 17th minute to leave goalkeeper Marc Andre ter Stegen frozen on the spot.

Hungary, who also beat England 4-0 away in June for the hosts worst home defeat for 94 years, are top on 10 points and will battle for the group spoils against Italy, who are second on eight after beating England 1-0 on Friday.

“Adam Szalai really deserves all the praise,” said Hungary’s Italian coach Marco Rossi. “In the first half we performed well, in the second we had to defend very deep.

“We can crown it all in the match against the Italians. It will be a special match for me against Italy. We are happy that we got 10 points from five matches. No one believed that.”

Germany could also face a UEFA investigation after Hungary forward Dominik Szoboszlai was hit by an object thrown from the stands in the 37th minute.

Germany, in third place on six points, suffered their first defeat under coach Hansi Flick in their penultimate game before the World Cup in November, and cannot qualify for the Nations League final four. England are bottom on two and relegated.

Germany were on the back foot from the beginning and ter Stegen, starting in the absence of Manuel Neuer who has tested positive for Covid-19, had to rescue them in the 25th when he stopped Daniel Gazdag’s effort from close range.

Lacking any energy and posing no real threat, the hosts had to wait 27 minutes before their first shot, with Leroy Sane’s long-range effort flying high over Peter Gulacsi’s crossbar.

Sane did better in the 51st but Gulacsi denied the forward. The home side were sharper after the break and had lots of possession but carved out far too few chances with lone striker Timo Werner taken off after 69 minutes.

“The first half was very disappointing,” Germany captain Thomas Mueller said. “We made far too many mistakes and you could feel that many in their clubs are not going through the easiest phase.”

This was a reference to Bayern Munich, who had four players in Germany’s lineup and have gone four games without a league victory, the club’s longest winless stretch in 20 years.

“Without pressure we made mistakes and almost everyone was affected. We just did not bring the power that we wanted to bring.”