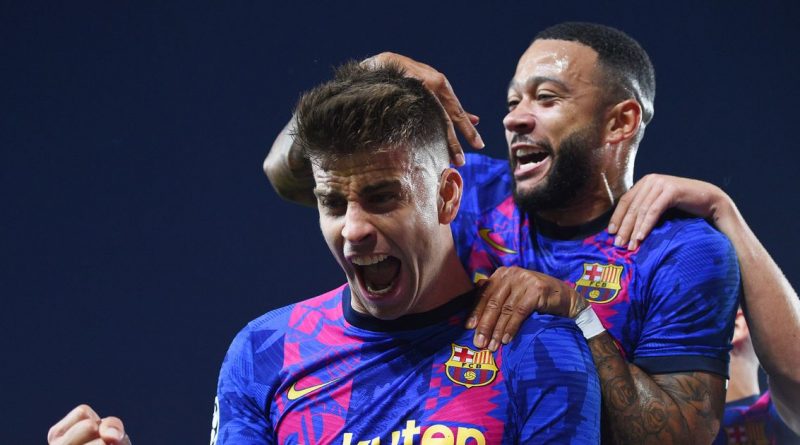 It was another dramatic and tense evening of Champions League action which ultimately saw the giants secure potentially vital wins.

While both Manchester United and Chelsea secured important home wins, there were also away victories for Juventus and Bayern Munich – the latter of whom had two goals ruled out by VAR but still netted four goals in a convincing triumph in Lisbon against Benfica.

Earlier in the day, Barcelona kept their hopes alive in the competition with a low-key victory at home to Dynamo Kiev – with the game’s only goal being scored by Gerard Pique, who equalled a Champions League record in the process.

Villarreal and Red Bull Salzburg also recorded victories on a night where Sevilla were held to a scoreless draw in France against Lille.

Here are five things we learnt from tonight’s action.

Which teams do you think are contenders for this season’s Champions League title? Let us know in the comments below

Pique’s goal was enough for Barca to beat Dynamo Kiev
(

Barcelona had lost each of their opening Champions League matches for the first time ever this season, with humbling three-goal defeats against both Bayern Munich and Benfica.

Ronald Koeman’s side stopped the rot on Wednesday with a narrow win at home to Dynamo Kiev, albeit in another underwhelming and forgettable performance.

Gerard Pique’s first half strike was enough to decide the game between two sides who had failed to score in their competition this campaign prior to tonight.

It was Pique’s 16 th goal in the Champions League – equalling a long-held record by Roberto Carlos for the defender with the most goals in the tournament and moving one clear of Sergio Ramos.

The result keeps Barca’s hopes in the competition alive but they will almost certainly need to win in Ukraine next time out against a side who rarely threatened the hosts.

Lewandowski was on target again for Bayern
(

Chelsea were heavily linked with a move for Robert Lewandowski this summer, before eventually moving to sign Romelu Lukaku.

On a night where Lukaku limped off injured, Bayern Munich striker Lewandowski gave the Blues another reminder of what they could have had as he netted again for the German champions in a thumping four-goal win at Benfica.

He has now scored in seven successive Champions League matches for Bayern, having previously netted braces in the wins over Barcelona and Dynamo Kiev this campaign.

Lewandowski’s was the third of the night after Leroy Sane had given Bayern the lead and an Everton own goal doubled the lead.

The Poland marksman and Thomas Muller both had goals ruled out by VAR earlier in the game but Bayern had more than enough to overpower the Portuguese giants, with Sane adding his second and Bayern’s fourth late on.

Juve leave it late in Russia

Substitute Dejan Kulusevski netted a late winner three minutes from time to secure a narrow win for Juventus away to Zenit Saint Petersburg.

It means Max Allegri’s side have won all three of their group games to date – having beaten Chelsea last time out – and they are now in full control of the group, with the Blues also on course to go through.

Juve had troubles finding form at the start of the campaign but now appear to be hitting their stride both domestically and in Europe.

Gerard Moreno was on target for Villarreal against Young Boys
(

Manchester United’s Champions League group was always going to be tricky to negotiate with Villarreal and Atalanta both fancying themselves to progress to the knockout.

United would have preferred a favour from Swiss club Young Boys – who stunned Ole Gunnar Solskjaer’s side in the opening matchday – but the Spanish side ran out victors.

Yeremy Pino – on his 19 th birthday – gave Unai Emery’s side the early lead and the Yellow Submarine were in complete control as Gerard Moreno added a quickfire second.

Meschack Elia gave the hosts hope with 12 minutes remaining following a prolonged spell of pressure but Villarreal completed the win with Alberto Moreno, formerly of Liverpool, and Samuel Chukwueze both scoring late.

Karim Adeymi opened the scoring for Salzburg against Wolfsburg
(

Teenage forward Karim Adeymi is having a breakthrough campaign for club and country – his form for Red Bull Salzburg has seen him win his first senior caps for Germany.

Adeymi – who has been linked with a move to Liverpool and Bayern Munich, among others – netted twice as Salzburg defeated Lille earlier in the group and found the net again as the Austrian side ousted Wolfsburg 3-1 on Wednesday.

Who will be crowned Ballon d’Or winner? Vote for your winner below

The 19-year-old opened the scoring for Matthias Jaissle’s side and while Lukas Nmecha equalised for Wolfsburg, Noah Okafor netted a brace for the hosts to secure the points.

Salzburg have never reached the knockout stages of the Champions League before but have now secured seven points in their opening three matches and have taken early control of Group G.