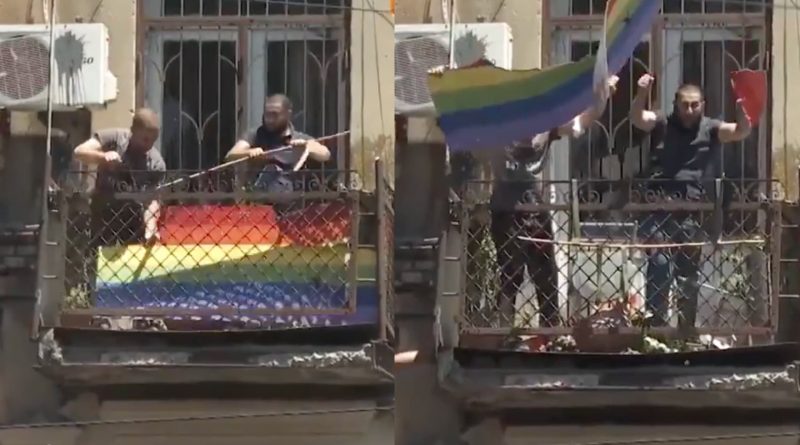 Members of the far-right stormed the Tbilisi Pride offices and tore down a Pride poster. (Twitter/Screenshot)

Georgian authorities have arrested a person for attacking a journalist covering the anti-Pride protests in Tbilisi earlier this month.

On Friday (23 July), the Ministry of Internal Affairs announced that Tbilisi police had detained a suspect who “physically and verbally” attacked a journalist.

The journalist, who was not named in the statement, was covering the far-right riots that ripped through Tbilisi in response to a planned Pride parade in the capital city.

The unnamed suspect reportedly “obstructed” the journalist before threatening and then committing acts of violence against them.

The incident took place along Rustaveli Avenue, where the Parliament of Georgia is located.

There, the unnamed journalist was reporting on violence that saw some 50 other members of the press attacked by religious, right-wing thugs.

TV Pirveli cameraman Alexander Lashkarava, died days after sustaining serious injuries when a mob brutally beat him, leaving him in a “pool of blood”, witnesses said.

With the investigation ongoing, the ministry added that those involved in the riots face charges of participating in group violence, unlawful interference with a journalist’s professional activities and persecution using violence or threat of violence under the country’s Criminal Code.

At the time of writing, the police have arrested 24 people in connection to the 5 July unrest, the ministry, which helms the country’s law enforcement, said.

The explosion of brutality that engulfed Tbilisi came after the powerful Orthodox Church called on followers to oppose a planned Pride march through the city.

Incensed protesters proceeded to assault civilians, tourists and journalists with stones, sticks, bottles and punches as they stormed the offices of both Tbilisi Pride and the Shame Movement, a youth-led anti-government campaign group.

Georgia quickly became torn by an ensuing culture war, as government officials sought not to blame the far-right thugs that actually enacted the violence, but the LGBT+ activists who simply tried to celebrate their Pride.