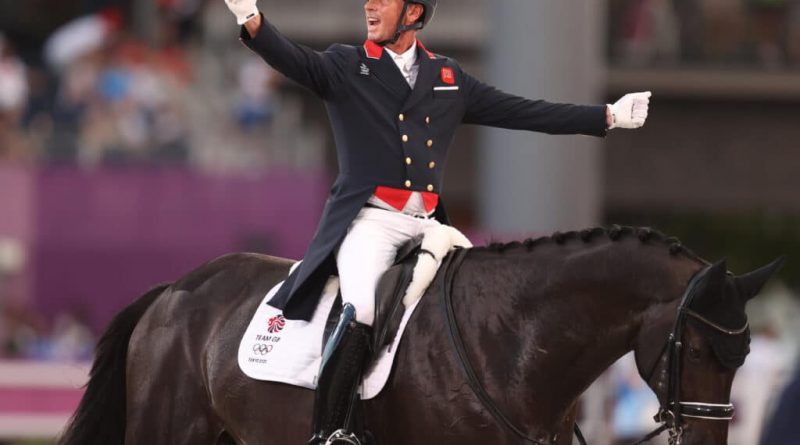 Carl Hester has become the second Britain to score a medal at the Tokyo Olympics. (Julian Finney/Getty Images)

Carl Hester has become the latest Team Great Britain athlete to win a medal at the Toyko Olympic Summer Games after picking up bronze in team dressage.

Hester, 54, was one of the only openly gay Olympians competing for Team GB in 2012 when he helped his equestrian team strike gold at the London Olympics – now he’s one of 13.

Together with his two teammates Lottie Fry and Charlotte Dujardin, as well as horse En Vogue, Hester delivered a sublime performance on Tuesday (27 July) to earn third place in dressage, a stylised form of riding that can be traced back to calvary riders in classical Greece.

In the opening round of the competition, Hester scored a thumping 2577.5 to thrust Team GB to second place.

After Fry and Dujardin strolled onto the Baji Koen equestrian park they clinched third with a sturdy 7727, being topped by the Americans (7747) and the Germans (8178) to grab silver and gold respectively.

An incredible day yesterday taking the Bronze medal. So proud of the team and the horses. It’s been such an memorable experience so far. This afternoon we did press and TV interviews ahead of the Freestyle tonight🤞🏻

“So proud of the team and the horses. It’s been such a memorable experience so far.

“This afternoon we did press and TV interviews ahead of the freestyle tonight. Crossed fingers.”

Hester joins other openly queer Brits such as Tom Daley who have had made it big in this year’s Olympic games. Daley picked up his first-ever gold medal during Monday’s men’s synchronised 10 metres platform.

But Hester isn’t the only queer man throwing their hat – or should we say riding tack – into the ring as gay Dutch couple Edward Gal and Hans Peter Minderhoud competed side-by-side during the team dressage, winning fifth place.

The couple, who have been together for more than a decade, celebrated dressage as an inclusive game that feels far removed from the many sports that are, at times, snarled by homophobia, such as football.

“There has always been a level playing field for all genders,” Minderhoud said of dressage, according to OutSports.

“I think it is still one of very few sports where men and women compete together, have no advantage and as such blend happily.”