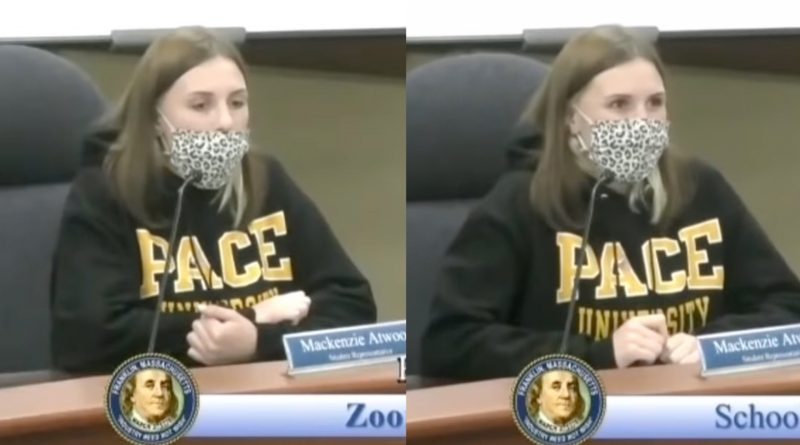 Mackenzie Atwood broke down in tears at the school board meeting. (YouTube)

A gay student was left in tears after she was shouted down and accused of “indoctrination” for opening up about her experience of bullying.

Mackenzie Atwood, a student at Franklin High School in Massachusetts, candidly discussed her own experiences of homophobic bullying and oppression at a school board meeting on Tuesday night (26 October).

Atwood, who sits on the school committee, told parents and staff at the school board meeting that she and other LGBT+ students at the school have been targeted because of their sexuality and gender identity.

The teenager opened up about her experience after a parent baselessly claimed that white children are being targeted by bullies because of their race at school.

Responding to those comments, Atwood explained to those gathered what a protected class means. However, she noted that minority groups are not always afforded the protection they deserve.

“Being in theatre – there’s obviously that stereotype that everyone in theatre is gay, and yeah, you can say that it’s pretty true because a lot of us are gay and it’s somewhere we can be comfortable and that’s a safe space,” Mackenzie said.

“So I think it’s important to understand that yes, everyone is protected at the school, but being someone who is Caucasian is not something that you’re getting bullied about.”

People in the crowd responded furiously to Mackenzie’s comments, prompting committee chair Anne Bergen to bang her gavel and call for order.

“Being homosexual – which may I say, I am gay, call me what you want about that – I am being personally attacked in school about this,” Atwood added.

That comment led to another furious outburst from a member of the audience, who declared: “It has to stop, this is the indoctrination!”

A visibly emotional Atwood responded: “It is extremely disgusting that you can look me in the eyes and say that I’m not being oppressed at this school.”

The encounter ended with Atwood shouting that there is “no such thing as the gay agenda”. The meeting was subsequently paused by Bergen in a bid to reinstate order.

Resuming the meeting, Bergen said: “I do not ever, ever want to ask anyone to leave, but this meeting will be conducted respectfully. There will be no shouting out from the crowd. That is not how we ever, ever conduct meetings in this building.”

Sara Ahern, superintendent of schools for the district, condemned the incident in a furious letter sent to members of the Franklin Community on Wednesday (27 October).

“It is with a heavy heart and sincere anger that I write regarding the events that transpired at last evening’s school committee meeting,” Ahern wrote.

“The conduct, tone, and disruption by some members of the audience was appalling and a violation of Franklin Public Schools’ core values of a safe and inclusive environment and a collaborative community as well as unacceptable with respect to public meeting procedures.”

Ahern defended Atwood as “eloquent and articulate”, adding that the jeers from members of the audience “created a traumatic situation for the student and invalidated her statement of reality she so courageously shared”.

She continued: “We are processing the impact of this traumatic event on those in attendance as well as the vicarious trauma ringing throughout the community.

“Last night’s disruption is not an isolated incident. Vitriol in civil discourse has only been increasing in both in-person settings as well as online in Franklin and elsewhere. This is true for children and adults alike.

“Last night’s disruption is not limited to the schools. Bias-based behaviour is permeating layers of the community. As adults, I implore you to be mindful of your behaviour as you serve as important role models. Our children are watching.”