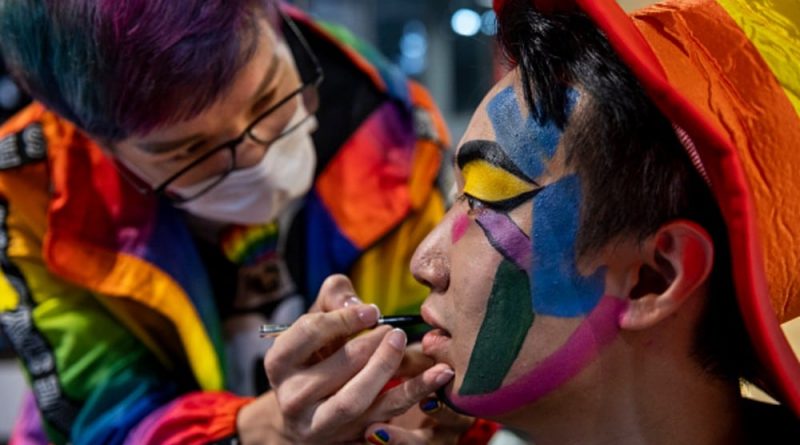 A gay pro-democracy activist from Hong Kong is facing a possible years-long prison sentence after being accused of subverting the state.

Jimmy Sham Tsz-Kit, a prominent voice for the pro-democracy movement in Hong Kong and a proponent of LGBT+ rights, was arrested and charged in February under the National Security Law imposed by the Chinese government.

Implemented in June 2020, the controversial law criminalises sedition (inciting rebellion against the state), secession and subversion of the state as well as collusion with foreign powers. The maximum punishment is life imprisonment.

Sham was one of 47 activists arrested and accused of subverting the state by participating in an election organised by the opposition.

He has been in detention since then and, according to human rights charity Amnesty International, has been repeatedly denied bail.

Amnesty is urging authorities to drop the charges and release Sham from pre-trial detention, saying: “Jimmy Sham Tsz-kit has spent months locked up in prison – simply for speaking out for his community and LGBTQIA+ rights in Hong Kong.

“He faces trial soon, where he could be sentenced to many more years behind bars.

“We need to act urgently to pressure the Hong Kong authorities to release him.”

Amnesty International estimates around 118 people have been arrested under the National Security Law, some of them for relatively minor offences such as posting pro-democracy messages on social media.

Other alleged offences include wearing a black t-shirt such as the ones protesters wore in 2019, as authorities believe it is a form of pro-democracy support, and promoting slogans like ‘Add Oil’, which is a Chinese phrase meaning ‘let’s go’ in reference to pro-democracy protests.

“In the 12 months since it was imposed by the Chinese government, the National Security Law has been used to stifle voice critical of the Hong Kong or Beijing authorities. Some of these people face life in prison if found guilty,” Amnesty wrote in a statement.

According to a poll conducted in 2017 by the University of Hong Kong , over half of the population support same-sex marriages and relationships.

There are currently limited protections for LGBT+ people in Hong Kong but same-sex marriage or civil partnerships are not recognised in Hong Kong.

Sham, who is the convenor of the Civil Human Rights Front and secretary of the LGBT+ organisation Rainbow of Hong Kong, married his husband in New York in 2014.