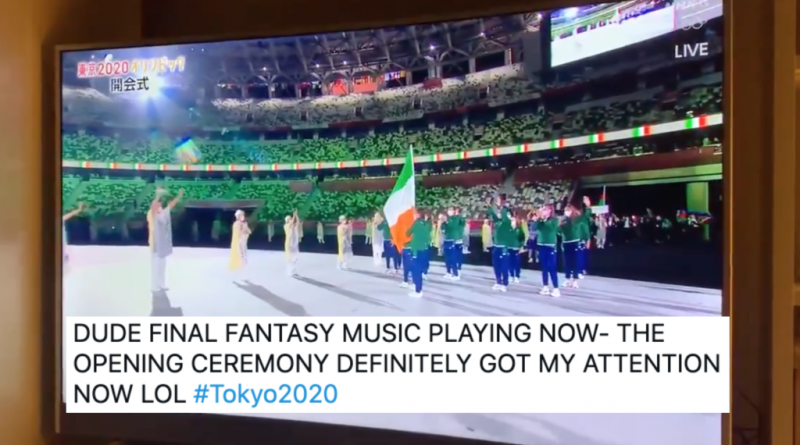 JRPGs are among Japan’s greatest exports, so to hear music from the greatest series at the Tokyo Olympics was a real joy for gamers.

Just imagine walking out into an Olympic stadium to the Hero’s Fanfare from Final Fantasy.

That’s exactly what happened for this year’s Olympians, with the Parade of Nations flag-bearing parade accompanied by orchestral versions of video game music.

The Final Fantasy fanfare is played at the end of each battle; now it’s the soundtrack to sporting heroes.

Anyone else humming along to the #Tokyo2020 #OpeningCeremony?

The lengthy orchestral medley also included songs from other great Japanese series, from Dragon Quest and Kingdom Hearts to Sonic the Hedgehog, Monster Hunter and even NieR.

Here’s a full list of songs at the Olympics according to Nikkan Sports and translated by VGC.

Sadly there was no Nintendo music included, despite Japan’s Prime Minister arriving at the Rio Olympics closing ceremony from a warp pipe back in 2016.

Gamers lose their sh*t at gaming music at the Olympics

Shocked and surprised at the music, gamers took to social media to collectively lose their sh*t.

Of particular interest was the Kingdom Hearts theme, especially as the series has its own version of Olympus thanks to Hercules.

As one account put it, “it’s cool to think about how video game music can bring together people from all walks of life”.

And, yes, followed up by the victory music from Final Fantasy. Did the #Olympics just level up? #Tokyo2020 pic.twitter.com/zvGcIblhE7

How awesome is it that the entire WORLD is currently listening to music from Final Fantasy, Kingdom Hearts, Dragon Quest, Monster Hunter, Tales of, Sonic, and so much more?

It’s cool to think about how video game music can bring together people from all walks of life. #Tokyo2020

THE KINGDOM HEARTS OLYMPUS THEME
AT THE OLYMPICS
THIS IS SO MUCH pic.twitter.com/DfIezJGV47

they are playing final fantasy and dragon quest music at the olympics opening ceremony I CANT BELIEVE IT pic.twitter.com/XABsbHpWOA

KINGDOM HEARTS MADE IT TO OLYMPICS LETS FUCKING GOOOOOOOOOO pic.twitter.com/mmTkUQ1LZ6

Gamers hearing Final Fantasy and Dragon Quest music playing during the #OpeningCeremony of the #Olympics pic.twitter.com/pNLW62Gxpy