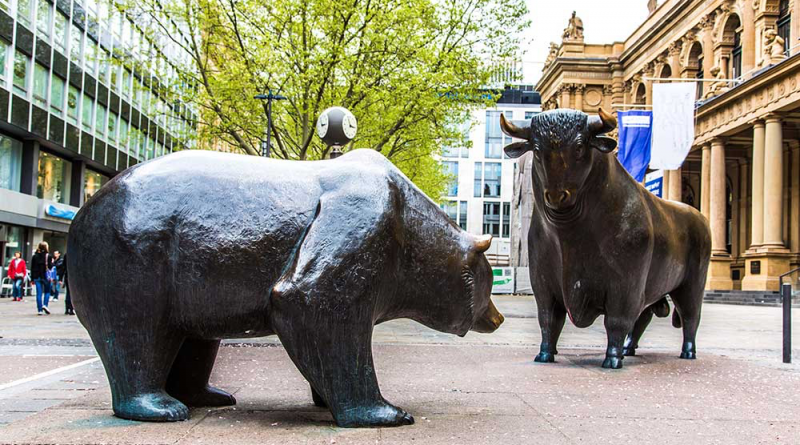 
The stock market rally is still standing, but is bruised and wobbly. The major averages are testing key support areas, though the Nasdaq has held its 200-day line so far. The Nasdaq has lagged the S&P 500 index since last February, with that underperformance increasing over the past two months.

Goldman Sachs (GS), Charles Schwab (SCHW) and Signature Bank (SBNY) report before Tuesday’s market open. GS stock fell below its 200-day moving average on Friday, though it’s technically in a base. Schwab stock is extended. SBNY stock is at the edge of a buy zone.

Xpeng stock is on the IBD 50 list. Deere (DE) was Friday’s IBD Stock Of The Day.

The video embedded in this article discussed the volatile market action as well as SM stock, On Semiconductor (ON) and Deere.

U.S. markets were closed Monday in observance of the Martin Luther King Jr. holiday, though other exchanges around the world were open.

That monetary push comes amid a slew of Chinese economic data. China’s economy expanded 4% in the fourth quarter vs. a year earlier, better than views for 3.3% but down from Q3’s 4.9% pace. GDP expanded 8.1% for the full year. December industrial production climbed 4.3% vs. a year earlier, slightly better than forecasts. But retail sales grew just 1.7%, less than half of estimates for 3.8%.

Remember that overnight action in Dow futures and elsewhere doesn’t necessarily translate into actual trading in the next regular stock market session.

New infections seem to have peaked in the U.K. as well as New York and Massachusetts, following the pattern in South Africa. Cases may be close to topping out nationwide, but not in much of the country. Hospitalizations are rising, but not nearly as much as in previous Covid waves.

The stock market rally traded up and down near key support levels this past week, ultimately closing modestly to solidly lower.

The 10-year Treasury yield edged up 1 basis point to 1.77%, rebounding Friday after pulling back modestly for three straight sessions. It hit a 23-month high of 1.81% intraday Tuesday. U.S. crude oil futures climbed more than 6% for the week to $83.82 a barrel.

Apple stock edged up 0.5% to 173.07 last week. On Monday, Jan. 10, AAPL stock rebounded from its 10-week line for the first time since its November breakout. Investors could use a move above Thursday’s high 176.62, a place to buy Apple stock from that 10-week line bounce. That would also push the iPhone maker above its 10-day and 21-day lines.

Apple doesn’t have a base per se, but has been consolidating tightly over the past several weeks, with the relative strength line holding right around record highs. Investors might treat this recent trading as a messy flat base, with a buy point around 181-182.

QCOM stock rose 4.6% to 188.69 last week. Shares have generally found support at their 21-day line since mid-December, but on Jan. 10 rebounded from their 50-day line. The RS line for Qualcomm stock is at a new high, especially powerful performance for a growth stock.

QCOM stock has been consolidating in a messy fashion since mid-November, though the trading looks tighter on a weekly basis. Officially, Qualcomm stock has a three-weeks-tight entry of 193.68, just above the top of the broader consolidation. Investors might look for a “draw the line” entry that’s a little lower than that. Alternatively, another test of the 50-day/10-week line, which might correspond to the 21-day, might be another way to enter Qualcomm.

The consolidation over the past two months follows two huge moves by QCOM stock. Shares gapped on earnings, then soared two weeks later as CEO Cristiano Amon touted a bright, post-Apple future for his company.

The wireless chip giant is likely to see its iPhone business fade in the coming years as Apple designs more chips in-house. But Qualcomm aims to expand its total addressable market from $100 billion today to roughly $700 billion over the next decade, connecting Internet devices from augmented reality glasses to automobiles.

Xpeng shot up 10% to 49.69 last week, rebounding from its 200-day line and reclaiming its 50-day line. Shares of the China EV startup, which has passed up Nio (NIO) and Li Auto (LI) in monthly deliveries, have an official buy point of 56.55 from a consolidation going back to Dec. 1. But XPEV stock just crossed a trendline on Friday, offering an early entry not far from its 50-day line. Shares also have 51.50 as short-term resistance.

SM stock shot up nearly 12% to 36.64 last week, clearing a 35.82 cup-with-handle buy point on Friday, according to MarketSmith analysis. However, the volume was light. The RS line for SM stock is close to highs, reflecting its strong performance vs. the S&P 500. But it’s a bit of a laggard in the oil patch. How long can oil prices and energy stocks keep running higher?

Deere stock edged up 0.2% to 379.56 last week. Shares fell slightly on Friday, giving a new handle less of a wedging look. The handle buy point is 386.65 in a base going back to early September. But DE stock has been consolidating since last May or even March. After earnings doubled in fiscal 2021, analysts see solid growth for the farm equipment giant in 2022 and 2023.

The stock market rally’s rebound from the Monday, Jan. 17, low hit resistance on Wednesday, with the major indexes tumbling on Thursday and Friday morning. But the Nasdaq, which undercut its 200-day line again on Friday, led a partial rebound.

The Dow Jones tested its 50-day line on Friday, with the S&P 500 holding below that key level. The Russell 2000 undercut Monday’s low, threatening to break below a yearlong consolidation.

The major indexes are not far from their Jan. 10 lows. Closing below those levels could spell the end of the market rally, which is already under pressure. On the plus side, after a vicious sell-off in the prior week, the major indexes ultimately didn’t give up much ground in this latest week.

The stock market rally still could use a convincing win. But, like a team down 3-0 or 3-1 in a best-of-seven series, a “win” wouldn’t resolve the market’s troubles. Beyond rebounding from or back above key moving averages, the major indexes need to reclaim Wednesday’s highs. For the Nasdaq, the 50-day line and its Jan. 4 peak would be further tests.

The Nasdaq composite has been lagging the S&P 500 for 11 months. That’s despite megacaps such as Apple stock, Tesla, Microsoft (MSFT), Nvidia (NVDA) and Google parent Alphabet (GOOGL), which at least until very recently had all been outperforming the benchmark index. It’s a reflection of how weak the average growth stock has been. Highly valued growth has been hammered, especially in the last couple of months, as FFTY, IGV and especially ARKK and ARKG show.

With the Federal Reserve increasingly hawkish and Treasury yields rising, growth stocks may continue to struggle.

Energy stocks remain strong, along with most financials. But Friday’s JPMorgan Chase (JPM) sell-off is a reminder that earnings season is back, adding to a host of risks for individual stocks, sectors and the broader market.

The 200-Day Average: The Last Line Of Support?

What To Do Now

Investors should be defensive. The major indexes are closer to breaking down than breaking out. Growth and tech stocks aren’t working right now, aside from Apple and some chip names such as Qualcomm.

Don’t rush to jump into the next bounce in growth. After several head fakes, investors should wait for real strength, not another dead-cat bounce.

Energy and financial sectors continue to lead, along with fertilizers and some other cyclical names. But don’t get too concentrated even here. A reversal in these areas would not be surprising, either from underlying bond or commodity prices shifting or the broader stock market dragging everything down.

This is a time to be building watchlists. Look for stocks showing strong relative strength and holding key support levels. A number of machinery, chemical and industrial stocks are shaping up, including Deere. Keep reworking your lists. Some stocks, such as Home Depot (HD), looked strong and steady two weeks ago but now are tumbling. Meanwhile, some other names, such as Xpeng and Deere, are showing a bit of strength.

Read The Big Picture every day to stay in sync with the market direction and leading stocks and sectors.