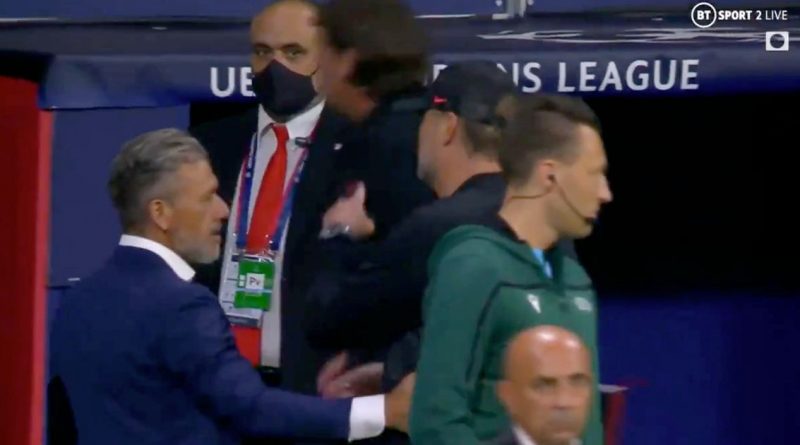 Liverpool secured a pulsating Champions League victory away at Atletico Madrid on Tuesday night in a five-goal thriller.

Early goals from Mohamed Salah and Naby Keita had appeared to put the Reds in full control in the Spanish capital but the home side came roaring back.

Antoine Griezmann netted twice for Diego Simeone’s side, but the Frenchman was later sent-off with a Salah penalty clinching the points for Liverpool – as VAR overturned a penalty for Atleti.

It was a tempestuous and controversial match with hostilities between the two managers apparent on the full-time whistle, when there was no traditional post-match handshake.

Jurgen Klopp was left behind by Diego Simeone without a handshake

Reds boss Jurgen Klopp made in the direction of the home side’s dugout after the full-time whistle in order to shake hands with his Atletico Madrid counterpart Diego Simeone.

However, the Argentine had already bolted out of his area and sprinted down the tunnel back to the home side’s dressing room.

This is a move that Simeone has become renowned for in Spanish football over the years, but it is one that proves controversial as it ignores the post-match formalities of a handshake between the two matches, which is seen to be a sign of good sportsmanship and fair play.

It was a move that appeared to take Klopp by surprise as the German appeared to be taken aback by Simeone’s exit, whom he waved with an outstretched hand afterwards in a show of bemusement – accompanied by a wry smile.

Followers of Spanish football may be accustomed to Simeone’s tendency to leave at the end of the match without any acknowledgement of his opposition bench but it nevertheless is a contentious move.

Klopp told BT Sport after the game: “The situation is clear I wanted to shake his hand, he didn’t want it.

“He was reaction was for sure not right, mine was not too cool either but we are both emotional.

“When I see him next time we will shake hands, definitely. He was obviously angry, not with me, but the game, the world and stuff like this.”

It adds fuel to a slightly heated rivalry between the two famous managers, which briefly sparked up after Atleti eliminated Liverpool from the Champions League in 2020.

Klopp had said back then when analysing the game: “I am completely happy with the performance. It’s so difficult to play a side like this.

“When I see players like (Marcos) Llorente, Koke, Saul… they could play proper football but they stand deep in their own half and have counter-attacks.

“But they beat us so we accept that and congratulate them.”

These words were put to Simeone in the pre-match press conference ahead of Tuesday night’s encounter, but the Argentine refused to be drawn into discussing them.

When asked if he had anything to say on Klopp’s comments, Simeone gave an abrupt response: “Nothing.”

It does appear that there is a bit of animosity between the two managers in terms of how they view football, with Atletico’s approach often finding success against Klopp’s Reds.

However, it was Liverpool who had the last laugh on Tuesday as they edged out a 3-2 victory in a captivating encounter.