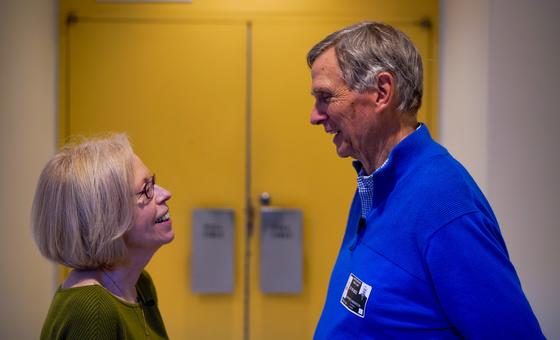 
Lawrence came to the United Nations for a guided tour with a group of disabled children from Bellevue Hospital. Ellen was known as a guide who was good with children, so she was assigned to lead their special visit.

One of the children, a boy called Herman, was in a motorized wheelchair, and when the elevator doors opened, he was so excited, that he set off in high speed down the corridor.

Ellen ran after him in her four-inch-high heels and this one little incident, broke the ice between Ellen and Lawrence.

Lawrence told UN News he remembers being captivated by Ellen’s appearance and her manner, but it was how she was with the children, how concerned she was for their welfare – and how she wanted them to feel comfortable – that really got him hooked.

He was also captivated by how good a tour guide she was for the group, bringing the history of the UN to life as they travelled through UN Headquarters.

After the tour, several coincidences led to a second meeting between the two. Instead of doing the last tour of the day, Ellen realized she could leave work early, and as she walked out with a colleague, who usually took another route out of the building, their paths crossed once again, outside of the Dag Hammarskjöld Library.

Amid the bustle of people leaving, Lawrence asked Ellen out on a date – and Ellen said yes immediately. The rest, as they say, is history.

They got married on 21 October 1972. Ellen ended up joining the United States global diplomacy team, and Lawrence went on to do a master’s degree in special education at New York University, and further devoted himself to helping disadvantaged children.

Fifty years passed by in a flash, and what would be more suited for their 50th Wedding anniversary, than to come back to the United Nations for a celebratory guided tour?

Going on a tour with current guide Hajer Ait Grain from Morocco, impressed them both: “Compared to what we were talking about at the time, the information she gave was like a lecture in a university, but at the same time very accessible,” says Ellen.

Keeping it in the family

Learning about the children’s tours, the couple, who are now grandparents, are considering bringing their two granddaughters on a tour at the UN Headquarters, so that they can understand the role of the United Nations from an early age.

As Ellen and Lawrence celebrate their 50th anniversary, the Guided Tours team at UN Headquarters, is celebrating its 70th anniversary.

The operation was opened to the public in November 1952. For seven decades, visitors from around the world have toured UN Headquarters, giving them the opportunity to see, hear, and feel diplomacy in action, while admiring the unique collection of artworks on display at UN Headquarters.

‘The face and voice’ of the UN

“Our multilingual tour guides have been the face and voice of the United Nations to over 42 million visitors from around the world,” said UN Secretary-General, António Guterres. “We celebrate their 70th anniversary and honour their vital ongoing mission to enhance understanding of the essential work of the United Nations.”

The Guided Tour is currently conducted in 13 languages, by a team of tour guides from 17 countries. Through the decades, the guides have been clothed by leading designers, from Edith Head, Christian Dior and Benetton in the 70’s, 80’s and 90’s, to Elie Tahari from 2017 to the present.

To celebrate the 70th Anniversary, Visitors Services, with the help of former guides, recently put together a fashion show displaying the uniforms worn during the seven decades, as well as an arrangement of traditional attire.

A round table discussion on the impact the experience of serving has had on their lives and careers was also held, with former guides from all seven decades.

An exhibit on the history and the role of the tour guides as “Ambassadors to the Public” is currently on view in the Visitors Lobby at the UN Headquarters to mark the anniversary. It is also available in digital format.

The UN Postal Administration has also issued a special commemorative stamp for purchase at the stamp shop.