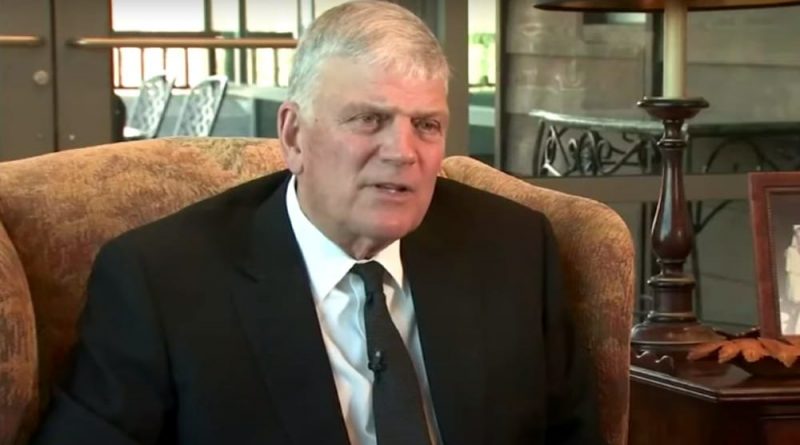 
Anti-LGBT+ preacher Franklin Graham will tour Britain after reportedly promising not to discriminate.

The son of late preacher Billy Graham is notorious for his anti-LGBT+ views. He sees marriage equality as a sin and has previously blamed gay people for a “moral 9/11”.

In 2020, the American announced an eight-date UK tour that was swiftly scuppered after each and every venue pulled out.

Graham vowed to sue them all. His attorneys argued they breached their contracts and discriminated against him for his religious beliefs.

Now, he has announced fresh UK dates with stops at the Liverpool, Sheffield and Newport venues that were originally listed for his 2020 tour.

He’s also announced a date at the Excel Centre in London. A previous London date was listed as venue TBC.

The ACC Liverpool conference venue was among those to cancel Graham’s originally scheduled date, saying his views were “incompatible with our values” at the time.

But on Tuesday (16 November), Liverpool’s LCR Pride Foundation tweeted: “We are aware that, following legal challenges, ACC Liverpool will now have to host an event in 2022 featuring evangelical speaker Franklin Graham, known for their anti-LGBT+ remarks.

“Alongside [the Liverpool-held international LGBT+ arts festival] Homotopia, we have been liasing with ACC Liverpool and other partners to understand the situation.

“While we are confident they have explored all options, it is clear that the event will go ahead.”

Hate is not welcome in the Liverpool City Region.

We are aware that following legal challenges, @ACCLiverpool will now have to host an event in 2022 featuring evangelical speaker Franklin Graham, known for their anti-lgbt+ remarks. (1/4) pic.twitter.com/FDBAsv9TZP

According to Insider, ACC Liverpool and ICC Wales have secured promises from Graham that his shows would not include discrimination.

“ICC Wales has received assurance from the Billy Graham Evangelistic Association that the content of the God Loves You Tour – UK will not breach any UK laws and that the reverend Franklin Graham will not be speaking out against anyone, or any group of people, and that his message will be one of God’s love and non-discriminatory,” the ICC Wales said, per Insider.

ACC Liverpool Group told the outlet: “We have received satisfactory assurances from the organisers of the event that the reverend Franklin Graham’s message will not be discriminatory, disrespectful or negative towards any particular communities, groups or individuals.”

“For that reason,” the statement read, “we are calling on our community, instead of campaigning to cancel the event, to work creatively to respond and show just how LGBT-friendly our city region can be.”

ACC Liverpool was the first venue to pull out of Graham’s 2020 tour, citing his long track record for incendiary remarks which had been raised by LGBT+ activists.

Among his offensive views are claims that same-sex marriage was orchestrated by Satan.

“In light of [his views], we can no longer reconcile the balance between freedom of speech and the divisive impact this event is having in our city,” ACC Liverpool, said in a statement at the time.

It didn’t take long for the other venues to follow suit. In Milton Keynes, the Marshall Arena said it cancelled over concerns that it could Graham would “lead to a breach of the peace“.

Newcastle’s Utilita Arena was the last venue to remove Graham’s event from its calendar.