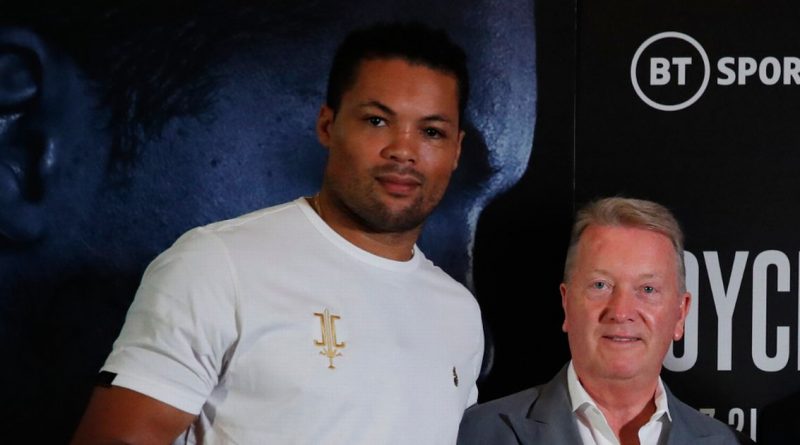 Frank Warren has predicted that Joe Joyce is on the brink of achieving ‘big things’ in his career as he takes on Carlos Takam on Saturday night.

The Juggernaut returns to the ring for the first time since he dethroned Queensberry Promotions stablemate Daniel Dubois with a late stoppage in a domestic clash back in October 2020.

He was set to face Usyk in a bid to become mandatory challenger to Anthony Joshua’s belt, but has been pushed to the back of the queue in recent weeks, and Warren has backed his fighter to defeat Takam and make a statement.

“We have all been working hard to get him in this position. He is on the cusp of something big,” Warren said.

“Joe’s had a fantastic amateur career, he was robbed of the gold medal in the Olympic final and is now unbeaten as a professional.

“I’m looking for him to put in a big performance and make a statement and show everyone that this guy can win a world title.

Joyce has since been confirmed as the WBO mandatory challenger, and should he win he could face the winner of Joshua’s fight with Oleksandr Usyk in his next outing.

Takam has since fired a warning to the 35-year-old that he could spring a ‘surprise’ on Saturday night and believes that he will be more difficult to face than Usyk due to his experience.

The heavyweight scene has faced several mix ups in recent weeks as Warren’s other fighter Tyson Fury has had his trilogy fight with Deontay Wilder rescheduled after a Covid-19 outbreak in his camp.

But Warren has placed Joyce right in the heavyweight mix, and believes he can capitalise on the situation as it is being resolved with Joshua’s fight taking place in September.

“The heavyweight scene at the top end is a bit messed up,” Warren said.

“The fight between Tyson and AJ should have taken place and now Tyson’s fight against Deontay Wilder has been pushed back until October. AJ against Usyk is now in September.

“In the meantime, the next generation of heavyweights are lining up, getting into position and filling the mandatory positions.

“If Joe beats Takam, then he will become the WBO’s mandatory challenger after AJ fights Usyk.

“The winner will then have to fight him or vacate and either way, Joe will be in a great position to fight for the world title.”

Fury’s fight with Wilder has now been rescheduled for October 9 in Las Vegas, with the ‘Gypsy King’ recently issuing his first response since the fight was postponed.

Despite the cancellation, he was seen posing for pictures with fans in Las Vegas, despite rumours that he had travelled back to the UK after missing out on his chance to return to action.

Joshua will also fight later in the year in September, as he continues to try to remain active by completing another world title defence over Oleksandr Usyk at the Tottenham Hotspur Stadium.

He has been sent a cryptic message by his Ukranian opponent in recent days, as he gears up to take on the Watford-based heavyweight in just his second fight in the blue-ribbon division.