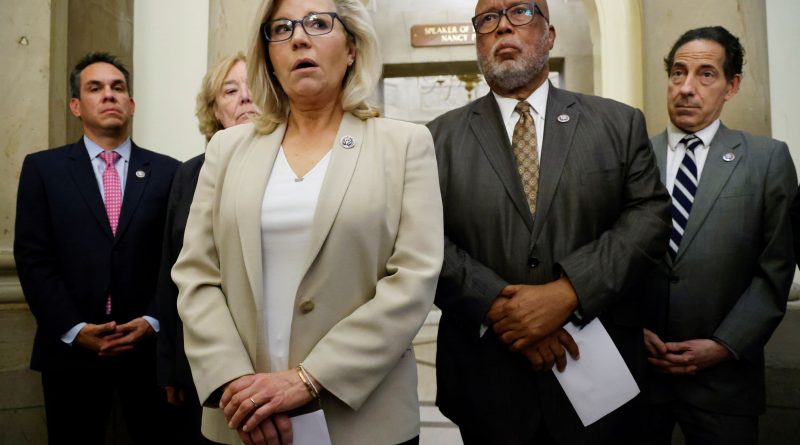 U.S. Representative Liz Cheney (R-WY), with Chairman Bennie Thompson (D-MS) and members of the Select Committee to Investigate the January 6th Attack on the U.S. Capitol speak to reporters after meeting with House Speaker Nancy Pelosi (D-CA) at the Capitol in Washington, U.S. July 1, 2021.

The House select committee investigating the deadly pro-Trump invasion of the U.S. Capitol will hold its first hearing Tuesday, the public kickoff of an already-polarizing probe meant to deliver a definitive report on the attempted insurrection.

The panel will hear directly from four law enforcement officers about their struggles to defend the Capitol from the mob of former President Donald Trump‘s supporters who stormed the building on Jan. 6 in a failed effort to stop Congress from confirming Joe Biden‘s electoral victory.

Cheney, who was ousted from GOP leadership after she refused to stop criticizing Trump for falsely claiming the 2020 election was rigged against him, is one of two Republicans appointed to the select committee so far.

The other, Rep. Adam Kinzinger of Illinois, accepted the role over the weekend — and promptly came under fire from his fellow Republicans, a growing number of whom reportedly want him and Cheney punished for their participation on the Democrat-led panel.

House Minority Leader Kevin McCarthy, R-Calif., at the White House on Monday referred to Cheney and Kinzinger as “Pelosi Republicans.”

The panel was assembled after Senate Republicans tanked a bill to form a bipartisan, “9/11-style” commission to study the Capitol invasion. Even before the House committee began its work, Republicans disparaged it as a partisan vehicle intended to smear Trump and the GOP and divert attention from the Biden administration.

GOP Reps. Jim Jordan of Ohio and Jim Banks of Indiana “made statements and took actions that just made it ridiculous to put them on such a committee seeking the truth,” Pelosi said.

McCarthy, who had submitted Jordan and Banks for the panel along with three others, responded by pulling all five names from consideration. He vowed that his party would conduct its own investigation, without providing details.

Cheney then accused McCarthy of working to “prevent the American people from understanding what happened” on Jan. 6 “at every opportunity.”

Pelosi, who said she would have appointed McCarthy’s three other picks, on Sunday appointed Kinzinger, another Trump critic, to the select committee.

“I swore an oath to uphold and defend the Constitution — and while this is not the position I expected to be in or sought out, when duty calls, I will always answer,” Kinzinger said in a statement.

Kinzinger and Cheney had both voted in the House to impeach Trump for inciting the attempted insurrection. Trump was acquitted in the politically divided Senate, where a two-thirds vote is required for conviction.

McCarthy in the days after the Capitol invasion said Trump “bears responsibility” for the attack, but later backed away from that remark.

McCarthy, asked Monday about the select committee after an event at the White House, referred to Cheney and Kinzinger as “Pelosi Republicans.”

The resolution that established the select committee gave Pelosi the power to appoint 13 members. House Intelligence Committee Chairman Adam Schiff, D-Calif., said Monday morning on MSNBC that the current roster was capable of carrying out its mission, but also said he was “open to the addition of others.”

The witnesses for Tuesday’s hearing — officer Harry Dunn and Sgt. Aquilino Gonell of the U.S. Capitol Police, and Metropolitan Police Department officers Michael Fanone and Daniel Hodges — have already spoken out about their experiences during the invasion.

Fanone has described being “tortured” by the violent mob. “I was, you know, struck with a taser numerous times at the base of my skull,” Fanone told CBS News last month.

Dunn in February told ABC news that he had been called a racial slur dozens of times on Jan. 6.

More than 500 people have been arrested in connection with the insurrection attempt, including at least 100 who have been charged with assaulting a federal law enforcement officer.