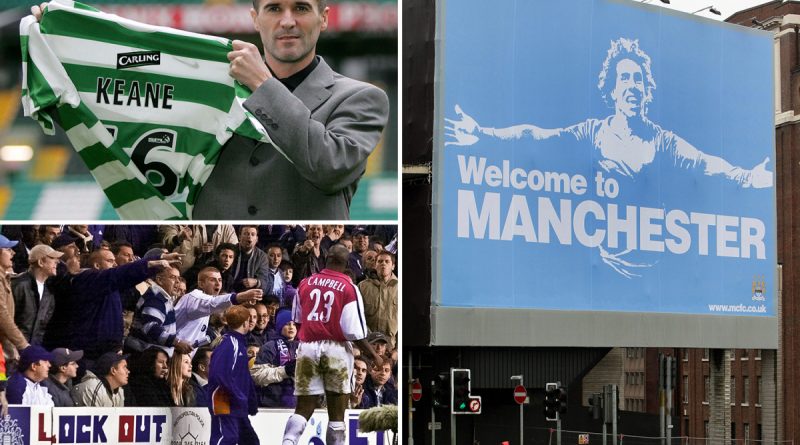 
AS Harry Kane tries to force a move to Manchester City, he may feel the wrath of Tottenham fans should he get his wish.

The England hotshot, 28, has delayed his return to North London, skipping training and extending his holiday in Florida.

Desperate to go to the Premier League champions, Kane would certainly rock a few Spurs supporters with the manner in which he’s gone about attempting to turn his dream into a reality.

And if Kane gets his wish, he could join these controversial stars who upset the apple cart.

With the Argentinian owned by a third party – agent Kia Joorabchian’s Media Sports Investment company – Tevez was technically on loan to Manchester United for two years.

The Red Devils dallied on a permanent deal, which allowed crosstown rivals Man City to swoop in 2009.

A billboard was then erected in Manchester facing in the direction of Salford with Tevez on a blue backdrop with the slogan ‘Welcome to Manchester’.

The whole matter left Sir Alex Ferguson incensed. “Stupid and arrogant,” he said of the poster. “A small club with a small mentality,” he labelled City.

Kane can count his lucky stars it’s not the Gunners trying to lure him away from Spurs.

In 2001, Sol Campbell’s contract with Tottenham was set to expire and was considering his options.

Few could believe the England legend would end up at arch-rivals Arsenal, after admitting he was seeking Champions League football.

It was “the ultimate act of betrayal”, according to the Tottenham Hotspur Supporters’ Trust said.

What goes around comes around in football, they say, and Ashley Cole leaving Arsenal for Chelsea was one Gunners fans STILL haven’t got over – often referring to him as ‘Cashley Cole’.

Chelsea and Jose Mourinho were accused of tapping up the ex-England left-back, when the pair met at a hotel restaurant to discuss a potential move.

At the time, Cole was disgruntled with a contract offer he’d received – famously admitting “I nearly swerved off the road” with the £55,000-per-week deal on the table.

All parties were fined for the tapping up incident, but that didn’t stop Cole from making his move a year later.

The Real Madrid presidential elections of 2000 brought arguably the most astonishing transfer in Spanish football history.

With Florentino Perez trailing in the polls, he launched an audacious bid for Barcelona talisman Luis Figo.

He offered the Portugal legend a guaranteed £1.6million if he lost the election, but if he won Figo would have to either move to Los Blancos or pay £19million in compensation.

Figo took the bait, and when Perez was voted in the £38million release clause was met and the winger joined Real.

When he returned to the Nou Camp in 2002, he was met with a hostile reaction, as well as a pig’s head that was thrown onto the pitch.

When Roy Keane made himself an enemy in the eyes of Sir Alex Ferguson, there was no going back.

First, he reportedly argued with Fergie over the quality of the set-up at the Portuguese resort United were enjoying a preseason training camp at in 2005.

Then, he blasted team-mates Rio Ferdinand, John O’Shea, Alan Smith, Kieran Richardson and Darren Fletcher in an interview with MUTV.

The explosive clip was never aired, but the damage was done. Keane was granted a free transfer – joining boyhood club Celtic.

The Diving Ponytail joined Juventus from Fiorentina in 1990 for a world record £8million fee.

But despite the huge cash windfall, Viola fans were fuming and they stormed the club’s offices – forcing president Flavio Pontello to hide in the stadium.

Amazingly, the riots saw 50 fans injured, while nine were arrested.

What happened next was even better. When the two played each other the following season, Baggio refused to take a penalty claiming Fiorentina keeper Gianmatteo Mareggini would know how to save it.

After he was substituted from the pitch, Baggio then picked up a Fiorentina scarf thrown at him and later revealed “his heart was purple”.

Forever the darling of Ajax fans, there was a time when Johan Cruyff threatened his reputation with them.

After giving them the best part of his football career, the Dutch club’s board felt the Netherlands legend was finished at 36 and refused to offer him a new deal.

Cruyff was furious. So mad, in fact, he signed for their bitter enemy Feyenoord, who he then led to the double and won Dutch Footballer of the Year.

“I wanted to take my anger out on Ajax via Feyenoord after the club had thrown me out with the rubbish”, he later admitted in his autobiography.