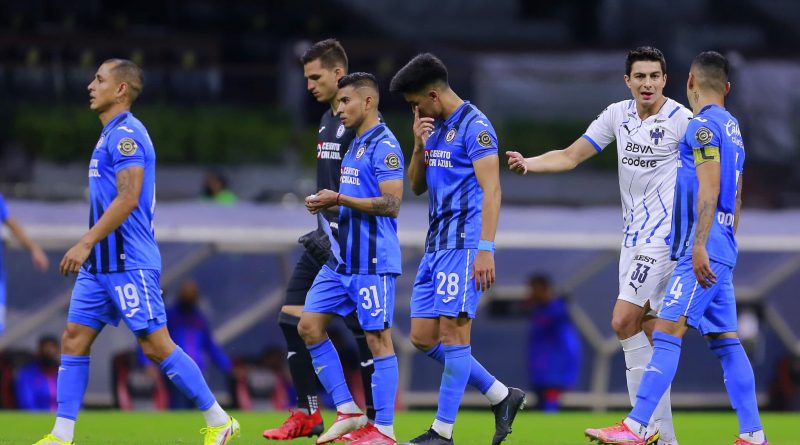 Players leave the field as the game is suspended due to the discriminatory shout during a match between Cruz Azul and Monterrey as part of the Concacaf Champions League 2021. (Mauricio Salas/Jam Media/Getty Images)

Homophobic chants ground a football match in Mexico to a halt as players were forced off the pitch.

Players left the field for some 10 minutes in the Concacaf Champions League semi-final second leg in Mexico City which saw Cruz Azul fair against Monterrey.

At around the 64-minute mark in Azteca Stadium, the match was frozen as Cruz Azul fans began hurling homophobic insults from the stands.

Cruz Azul was trailing Monterry 4-1 at the time. They had also resorted to similar homophobic language earlier in the match that forced referees to issue a stern warning.

The supporters shouted the “goalkeeper chant”, which typically Mexican fans chant “ehhh…” as the opponent’s goalkeeper lines up a goal kick until the kick is followed by a cry of “p**o!” – anti-gay slang for a male sex worker.

Shameful scenes at the Azteca. Players being taken off the pitch as step two of the protocol against the chant, which has been shouted repeatedly tonight, is activated. #CCL pic.twitter.com/twx0nKTfZT

Such a slur has long given football chiefs a headache, and Thursday night’s (16 September) game was no exception.

The Confederation of North, Central America and Caribbean Association Football, the football association otherwise known as Concacaf, said it will investigate the “offensive and discriminatory” comments.

A “large number” of Cruz Azul fans took part in the chart, Concacaf said in a news release on its website.

“We commend the referees for correctly activating the anti-discrimination protocol and the stadium security for ejecting hundreds of Cruz Azul fans when the match was paused,” the governing body said.

“The Confederation has for several months proactively communicated to fans, through its What’s Wrong Is Wrong campaign, that these types of behaviours have no place in football.

“We are all committed to eradicating the discriminatory ‘goalkeeper’ chant.”

In line with Concacaf’s discriminatory language policy, the game had to be briefly suspended as payers from both sides walked off the pitch and returned to their locker rooms.

Players off the field of the Azteca as the homophobic chant is heard despite previous warnings and the referee moves to step two. https://t.co/sLMn2ENZbp

If fans had continued to chant, referees would have been forced to enter “Step Three” of the policy which sees the match stopped altogether.

The match resumed, however, without a hitch. Ending with Monterrey making it to the finals on a 5-1 aggregate.