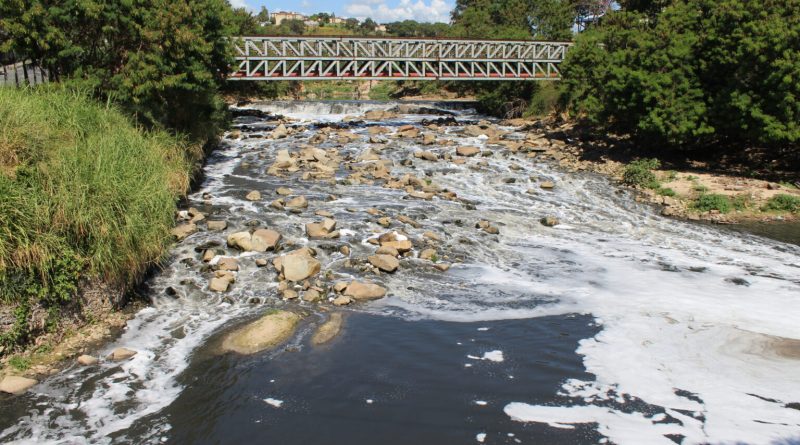 BELO HORIZONTE, Brazil, May 17 (IPS) – “We do everything through parties, we don’t want power, we don’t want to take over the role of the State, but we don’t just protest and complain,” said Itamar de Paula Santos, a member of the United Community Council for Ribeiro de Abreu (Comupra), in this southeastern Brazilian city.

Ribeiro de Abreu is one of the neighborhoods most affected by recurrent flooding in Belo Horizonte, capital of the state of Minas Gerais, as it is located on the right bank of the Onça (jaguar, in Portuguese) River, on the lower stretch, into which the water drains from a 212 square kilometer basin made up of numerous streams.

Cleaning up the river and preventing its waters from continuing to flood homes requires actions that also produce social benefits.

“We have so far removed 736 families who were living in high-risk situations, on the riverbank,” Santos told IPS in the same place where precarious and frequently flooded shacks gave way to the Community Riverside Park (Parque Ciliar, in Portuguese), which has a garden, soccer field, children’s playground and fruit trees.

The project, begun by local residents together with Comupra and the local government in 2015 and gradually implemented since then, aims to extend the community park 5.5 kilometers upstream through several neighborhoods by 2025.

This includes doubling the number of families resettled, cleaning up the Onça basin and its nine beaches, three islands and three waterfalls, preserving nature and developing urban agriculture, and creating areas for sports and cultural activities. All with participatory management and execution.

Displaced within the same neighborhood

The families removed from the flood-prone riverbank now live mostly in safe housing in the same Ribeiro de Abreu neighborhood, which had 16,000 inhabitants at the 2010 census, but is now estimated to be home to 20,000 people.

The Belo Horizonte city government has a rule to resettle families from risky areas in places no more than three kilometers from where they used to live, Ricardo Aroeira, director of Water Management of the Municipal Secretariat of Works and Infrastructure, told IPS.

That is the case of Dirce Santana Soares, 55, who now lives with her son, her mother and four other family members in a five-bedroom house, with a yard where she grows a variety of fruit trees and vegetables.

“It’s the best thing that could have happened to us,” she said. Five years ago she lived next to the river, which flooded her shack, almost always in the wee hours of the morning, every year during the rainiest months in Belo Horizonte – December and January.

“We had bunk beds and we piled everything we wanted to save on top of them. Then we built a second floor on the house, leaving the first floor to the mud,” she told IPS. “But I didn’t want to leave the neighborhood where I had been living for 34 years.”

She was lucky. After receiving the compensation for leaving her riverside shack, an acquaintance sold her their current home, at a low price, with long-term interest-free installments.

Soares, who is now a domestic worker, had a daycare center that started losing money in the face of the increased offer of free nursery schools by the local government, and the COVID-19 pandemic over the last two years.

Itamar Santos, a 64-year-old father of three, has also lived in the neighborhood for almost four decades. Before that, he worked as a mechanical lathe operator in other cities and for three years in Carajás, the large iron ore mine in the eastern Amazon, 1,600 km north of Belo Horizonte.

In 1983, in Carajás, he lost his right leg when he fell into a 12-meter well. “It was night-time, and there was no electricity, just dark jungle,” he explained. After the first painful impact, he learned to live with his disability and regained the joy of living, with a specially adapted car.

He became an activist and among his achievements were free bus tickets for paraplegics and a gymnasium for multiple sports. “Creating conditions that enable the disabled to leave their homes is therapeutic,” he told IPS.

But the cause that impassions him today is the river, which in January has a heavy flow due to the heavy rains that month, but dries up in September, in the dry season.

“Let the Onça drink clean water” is the slogan of a movement also promoted by Santos, to emphasize the protection and recovery of the thousands of springs that supply the river and its tributary streams.

Every year since 2008, this movement, driven by Comupra, organizes meetings for reflection and debate on the revitalization of the river in riverside venues in different neighborhoods in the basin.

The festivities are also repeated annually, or more often. Carnival brings joy to the local population on the beaches or squares along the banks of the Onça River, and giant Christmas trees are set up for the communities to come out and celebrate the holidays.

The basin, or more precisely sub-basin, of the Onça River comprises the northern half of the territory and the population of Belo Horizonte, which totals 2.5 million inhabitants. The south, which is richer, is where the Arrudas River is located.

Both emerge in the neighboring municipality to the west, Contagem, and flow east into the Das Velhas River, the main source of water for the six million inhabitants of Greater Belo Horizonte. As they cross heavily populated areas, they are the main polluters of the Velhas basin.

The Belo Horizonte city government has been working on drainage plans for years and has been implementing the Program for the Environmental Recovery of the Valley and Creek Bottoms since 2001.

In April it published the Technical Instruction for the Elaboration of Drainage Studies and Projects, under the general coordination of Aroeira.

Since the end of the last century there has been a “paradigm shift,” said Aroeira. Channeling watercourses used to be the norm, but this “merely shifted the site of the floods.” Now the aim is to contain the torrents and to give new value to rivers, integrating them into the urban landscape, cleaning them up and at the same time improving the quality of life of the riverside populations, he explained.

The construction of long, narrow linear parks, which combines the clean-up of rivers or streams with environmental preservation, riverside reforestation and services for the local population, is one of the “structural” measures that can be seen in Belo Horizonte.

The participation of students and teachers from three neighboring schools stood out in the implementation in 2008 of the Nossa Senhora da Piedad Park in the Aarão Reis neighborhood, home to 8,300 inhabitants in 2010, near the lower section of the Onça River.

Cleaning up the creek that gives the park its name was the major environmental and sanitary measure.

“Sewage from the entire neighborhood contaminated the stream and caused widespread illnesses among the children, such as diarrhea, verminosis (parasites in the bronchial tubes) and nausea,” Maria José Zeferino, a retired art teacher at one of the local schools, told IPS.

The park, which belongs to the municipality, has an area of 58,000 square meters, a pond, three courts for different sports, a skateboarding area and a paved walkway for the elderly. A total of 143 families and one farm received compensation to vacate the area, leaving many fruit trees behind.

“A clean river was our dream. And the goal of the next stage is to have swimming, fishing and boating in the city’s streams,” said Zeferino.

The Primer de Mayo Ecological Park, in the neighborhood of the same name with 2,421 inhabitants according to the 2010 census, was built during the revitalization of the stream of the same name, covering 33,700 square meters along a winding terrain. The novelty is a medicinal herb garden, a demand of the local population.

“We discovered 70 springs here that feed the stream that runs into the Onça River,” said Paulo Carvalho de Freitas, an active member of the Community Commission that supports the municipal management of the park and carries out educational activities there.

“My fight for the future is to remove much of the concrete with which the park was built, which waterproofs the soil and goes against one of the objectives of the project,” which was inaugurated in 2008, said Freitas.