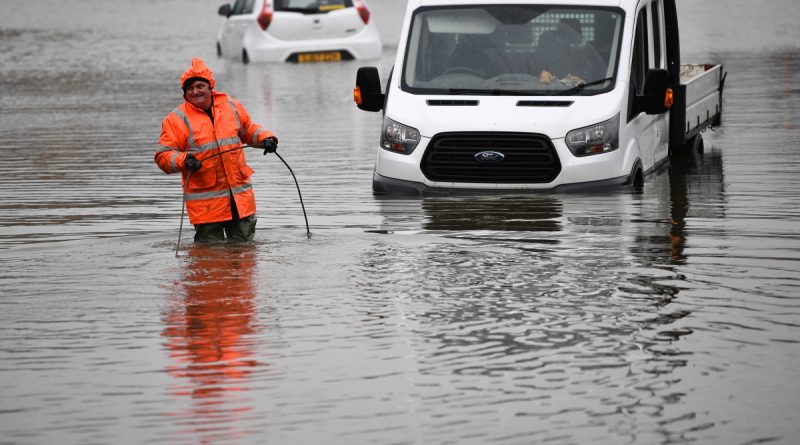 
MILLIONS of Brits face flash floods this weekend — with some areas seeing up to four inches of rain.

Yellow warnings for thunderstorms are in force from today until late tomorrow in the North and North Wales.

But the Met Office says almost anywhere could be hit by severe downpours  —  with an inch of rain in an hour a possibility.

“We know the footprint of where we think the heaviest rainfall will be, but it’s like a boiling saucepan.

“You will get bubbles coming up — and trying to pinpoint where the next bubble will be is virtually impossible.”

The unsettled weather is likely to continue into next week, the Met Office predicts.

A yellow warning for thunderstorms has now been extended to Saturday, with the Met Office urging Brits to stay safe.

From today, 60mph winds are expected and more than a month’s rainfall in a single day is possible in some areas.

From Friday, a yellow weather thunderstorm warning will spread to cover most of northern England and Scotland from 10am, with up to 100mm of rain set to fall in some parts.

This will remain in place until 9am Saturday – and the Met Office is warning that the combination of flooding and lightning strikes could pose a danger to drivers, homes and businesses.

The mercury will also struggle to climb above 19C or 20C across Saturday and Sunday.

It follows record rainfall across parts of western Europe, where floods have killed at least 120 people in the last month.

Entire towns and villages were destroyed as rivers burst their banks in Germany and Belgium.

Bookmakers have now slashed their odd on 2021 having the wettest August on record in the UK to 6-4.

Coral’s John Hill said: “We are in for a rough few days ahead and with torrential rain set to fall in many parts of the UK, we could be set for the wettest August on record.

“It’s been a wet summer so far and if things continue, it may end as one of the wettest ever,” added Hill.

But a heatwave is set to send temperatures soaring in the second half of August, with the sunshine starting as early as next week.