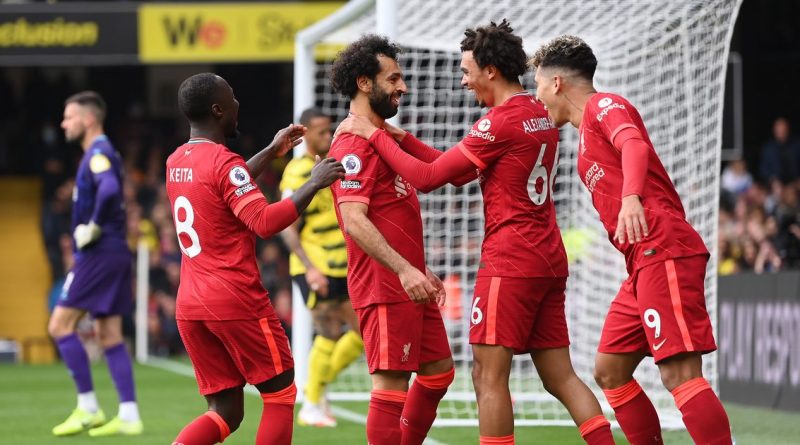 Liverpool now occupy top-spot in the Premier League after brushing aside Watford at Vicarage Road.

First half goals from Sadio Mane and Roberto Firmino were enough to ensure Jurgen Klopp’s half-time team-talk would have been along the lines of ‘more of the same’.

Firmino added his second, Liverpool’s third just five minutes into the second-half after Ben Foster could only parry Craig Catchcart’s clearance into the path of the Brazilian

The best was yet to come however, as Mohamed Salah notched his seventh league goal of the season in spectacular fashion.

The Egyptian showcased his world class dribbling skillset to leave just about every member of the Watford defence for dead before curling his effort beyond Foster.

Firmino notched his third late on to secure his second ever Liverpool hat-trick.

Claudio Ranieri, meanwhile, looked less than impressed at full-time with what he had seen during his first game in charge of Watford.

The pre-match statistics made for bad omens for the hosts – who have enjoyed just two wins in 35 years vs today’s visitors.

Mohamed Salah scored his seventh of the season in spectacular fashion
(

Liverpool’s Egyptian talisman is arguably the best player on the planet on current form – his goal and assist today only reinforcing that claim.

If his assist was stunning, a precise, pinpoint pass into the path of Sadio Mane with the outside of his left boot – his goal was otherworldly.

The ball seemingly glued to the feet of the Reds forward, a deft ball-roll inside the Watford area was followed by a stunning cut-back that left Cathcart beaten all ends up before curling a left-footed effort past Foster – who was rooted to the spot.

Salah’s goal ensures yet another record has been broken by the 29-year-old, his ludicrous effort seals his status as the highest scoring African player in Premier League history with 104 – surpassing Didier Drogba ’s 103 in the process.

While Salah has stolen the majority of the headlines in recent weeks, Mane has quietly enjoyed yet another stellar start to a season – notching his fifth goal of the campaign to open the scoring for the visitors.

The Senegal international was a constant thorn in the side of the Hornets defence, his right-footed effort beyond Ben Foster exuded the kind of confidence of a forward in fine form.

The strike also wrote Mane’s name into the Premier League history books as he hit the coveted 100 goal mark – just weeks after Salah did the same.

Mane’s century comes with a fact that arguably makes the feat more impressive – he is just the third player in Premier League history to reach 100 goals without a single one of them being from the penalty spot.

No new manager bounce for Watford

If Ranieri wasn’t fully aware of the size of the task at hand prior to kick-off, he knows all too well now.

Taking charge of his first Watford game since his arrival during the international break, the Italian could not inspire the Hornets to a shock victory in his opening game.

The other boss is a man now well-versed in all things Merseyside – former Reds and current Everton manager Rafael Benitez.

The Watford faithful are used to seeing a new face in the dugout and Ranieri will have to increase the standard of performance if he is to avoid a similar fate to the many that have gone before him.

Virgil van Dijk was in his usual stellar form against Watford

HAVE YOUR SAY! Are Liverpool favourites for the title? Comment below.

As a day’s work goes – few will be easier for Virgil van Dijk than this one and yet he still managed to stand out.

There can be little doubt as to who the Premier League’s best central defender is as the Netherlands international asserted his dominance yet again against Watford.

The contest at Vicarage Road came just one day short of the year anniversary of the horrific injury Van Dijk suffered during last season’s Merseyside derby at Goodison Park.

364 days on, the centre-half has not lost an ounce of his class – spraying a number of delightful passes all over the pitch, displaying his remarkable range with the ball at his feet.

Van Dijk was forced to deal with a bouncing ball and the onrushing Emmanuel Bonaventure – where many would have cleared the lines and booted it into row z, Van Dijk deftly headed the ball backwards over the head of Bonaventure before starting another move for the Reds.

Watford endured a torrid afternoon at home to Liverpool

The newly-promoted outfit have a reputation as being somewhat of a ‘yo-yo’ club, often achieving Premier League status only to get relegated shortly after.

While the Hornets are not quite in serious relegation zone danger just yet, Ranieri will need to steady the Watford defence if they are to have any chance of staying up come May.

Mane’s opener marked 18 matches without a Premier League clean sheet for Watford – coincidentally, their last came in a 3-0 win over Liverpool in February of 2020.

Foster did well to ensure the score-line stayed at just five between the sticks for the hosts, making a number of impressive stops throughout.

In their opening eight games, Watford have shipped 15 goals – the second worst defensive record in the league.