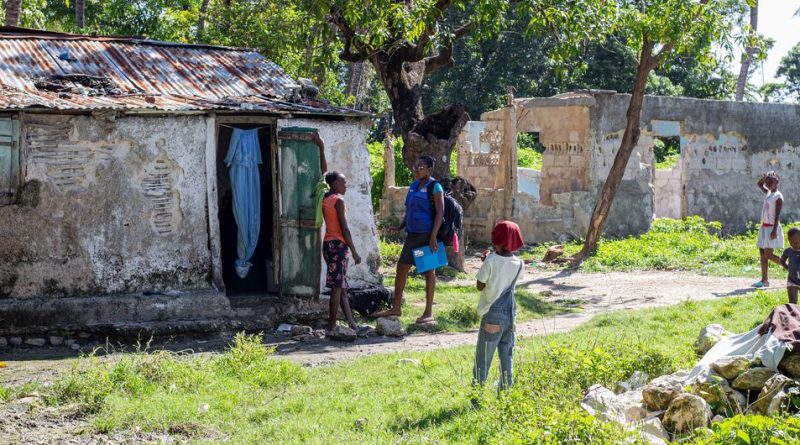 A community health worker in the Haitian capital, Port-au-Prince, has been describing how she is going door-to-door to raise awareness about cholera prevention.

A community health worker in the Haitian capital, Port-au-Prince, has been describing how she is going door-to-door to raise awareness about cholera prevention.

The deadly but treatable disease has been spreading across the country and according to the latest Government figures published on 16 November there have been some 8,100 people admitted to hospital and over 170 deaths.

Esterline Dumezil was trained by the Ministry of Public Health and Population and by the Pan American Health Organization (PAHO/WHO).

“I have been working in the commune of Cité Soleil in Port-au-Prince since 2014, so for eight years The situation has deteriorated over time which means life is very difficult for the people who live here. They talk to me about their health concerns, but they also worry about the economic and security situation. They are very fearful about the return of cholera.

My job is to walk and raise awareness in the neighborhood. I provide a lot of public health-related information and now that cholera has resurfaced, I go from door to door visiting families at home. I educate people on the importance of using treated water for drinking, cooking at home, handwashing and other measures they can take to prevent the disease from spreading further.

Local people have many questions, they also want to tell me about their concerns and problems. I provide reassurance by reminding them that cholera is not a fatal disease and is treatable. If the basic rules of hygiene are observed, then one can fight the disease.

When I find a person suffering from diarrhoea, no matter how severe, I refer them to one of two hospitals in the community which have been equipped to receive cholera patients; I know they will be well taken care of.

It is very important for me to count suspected cases as well as note the information that local people share with me. I pass on this information to my superiors at the Ministry of Health, which helps our epidemiologists to better understand how people are affected by cholera, all over the country.

Helping the most vulnerable

We are still on the ground, despite the difficulty of the current situation in the country. Community health workers are not idle, we are trained to help the most vulnerable people. It is a duty, and it’s a source of pride for me to be part of this effort.

Personally, I like to think that each person can contribute to improving life in our communities. That’s why I decided to become a community health worker, because I enjoy helping people and being part of change. It’s also a really important job which can save lives.

Meeting people and helping them is what gives me most happy in this job. I enjoy going to their houses and I feel comfortable in the neighbourhood, despite the insecurity caused by gangs, as people know and trust me.

I have never regretted dedicating my life to this job. I enjoy going to meet people in their homes and that’s when I am happiest.”

The UN’s cholera response for Haiti:

A range of UN agencies including, IOM, UNAIDS, UNFPA, UNICEF and WFP as well as the UN Humanitarian Air Service, UNHAS are also supporting the UN’s cholera response.

The community health workers, who are known by the French acronym as ASCPs, play a central role in the Ministry of Health’s PAHO/WHO-supported Community Health Strategy. With intimate knowledge of and access to the communities they serve, they have been at the forefront of an integrated response to cholera especially in hard-to-access areas such as Cite Soleil. So far 300 have been trained and deployed on the ground to conduct risk communications and community engagement activities.