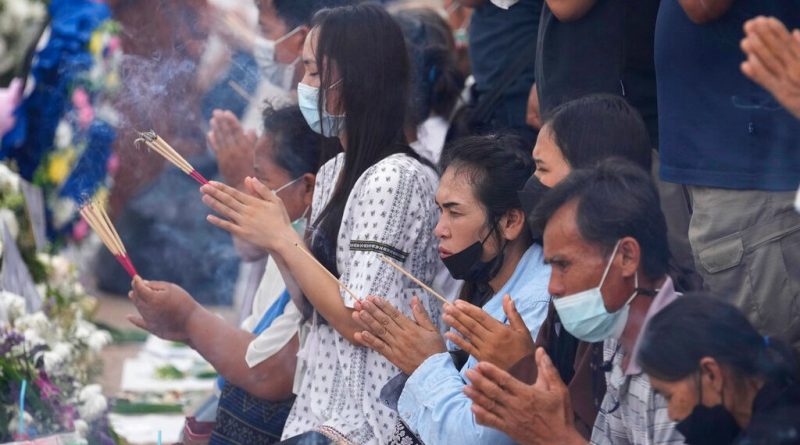 
UTHAI SAWAN, Thailand — Families offered flowers and dolls, popcorn and juice boxes to children massacred at a day care center in Thailand, part of a Buddhist ceremony held Sunday just paces from where the slaughter began that was meant to guide the young souls back to their bodies.

“Come back home” and “come back with us,” the relatives called into the empty day care center, many with tears in their eyes.

The gun and knife attack on the Young Children’s Development Center in Uthai Sawan was Thailand’s deadliest mass killing, and it robbed the small farming community of much of its youngest generation. The former police officer who stormed the building killed two dozen people at the day care before taking more lives as he fled, including his wife and child, police said. He then killed himself.

Ceremonies were held Sunday at three temples, where the 36 victims — mostly preschoolers — were taken ahead of funeral rites and cremation on Tuesday.

Maneerat Tanonethong — whose 3-year-old Chaiyot Kijareon was killed at the day care center — said the rituals were helping her with her grief.

“I am trying not think about horrible images and focus on how lovely he was. … But I don’t know what I will do with myself once this is all over,” she said. “I am determined that I will try let go of this, that I won’t hold any grudge against the perpetrator and understand that all of these will end in this life.”

At Rat Samakee temple, family members sat in front of the tiny coffins while Buddhist monks chanted prayers. They placed trays of food, toys and milk along the outside of the temple walls as offerings to the spirits of their slain children.

Later, they headed to the day care center and gathered in front of a makeshift memorial there to receive the slain children’s belongings. They made offerings of their kids’ favorite foods and lit incense and candles as they implored the children’s souls to return to their bodies.

Many Buddhists in Thailand believe that in cases of unnatural death, the soul becomes stranded in the place where the person perished and must be reunited with the body before eventual rebirth.

Police identified the attacker as Panya Kamrap, 34, a police sergeant fired earlier this year after being charged with a drug offense.

An employee at the day care told Thai media that Panya’s son had attended the center but hadn’t been there for about a month. Police have said they believe Panya was under stress from tensions between him and his wife, and money problems.

The attack has left no one in the small community untouched, and brought international media attention to the remote, rural area. Thai authorities on Sunday fined two CNN journalists for working in the country on tourist visas but cleared them of wrongdoing for entering the day care center, saying they had filmed inside believing they had obtained permission.

Deputy national police chief Surachate Hakparn said the journalists were waved into the building by a volunteer or a health officer and did not know the person was not authorized to allow them inside.

In a statement, Mike McCarthy, CNN International’s executive vice president and general manager, said the team sought permission to enter the building but “now understands that these officials were not authorized to grant this permission.”

Mass killings in Thailand are rare but not unheard of.

In 2020, a disgruntled soldier opened fire in and around a mall in the northeastern city of Nakhon Ratchasima, killing 29 people and holding off security forces for some 16 hours before being killed by them.

Prior to that, a 2015 bombing at a shrine in Bangkok left 20 people dead. It was allegedly carried out by human traffickers in retaliation for a crackdown on their network.