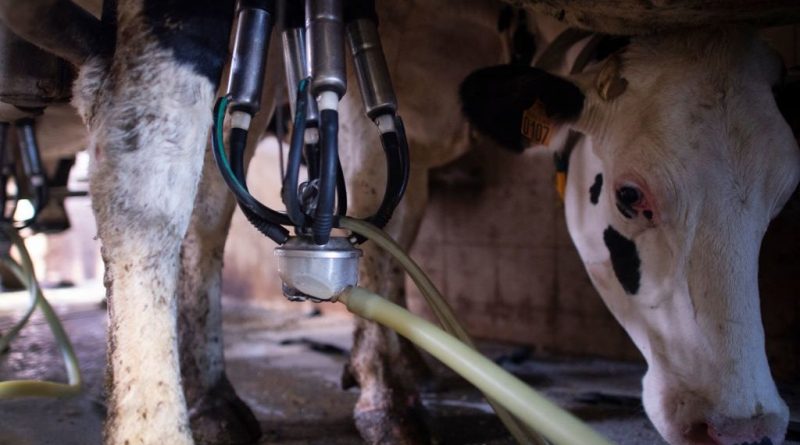 
Heat and drought are inflicting perilous strain on dairy cows across the globe, drying up their milk production and threatening the long-term global supply of everything from butter to baby formula.

Volumes of dairy are forecast to sink by nearly half a million metric tons this year in major exporter Australia as farmers exit the industry after years of pressure from heat waves. In India, small-scale farmers are contemplating investing in cooling equipment they’d have to stretch to afford. And producers in France had to pause making one type of high-quality cheese when parched fields left grass-fed cows with nowhere to graze.

Some of the world’s biggest milk-making regions are becoming less hospitable to these animals due to extreme weather brought on by climate change: Cows don’t yield as much milk under the stress of scorching temperatures, and arid conditions and storms compound the problem by withering or destroying the grass and other crops they eat.

Read More: Climate-Proof Towns Are Popping Up Across the U.S. But Not Everyone Can Afford To Live There

In the US alone, some scientists estimate climate change will cost the dairy industry $2.2 billion per year by the end of the century — a financial hit not easily shouldered by a sector that already struggles to make money. If greenhouse gas emissions remain high, one study estimates that the dairy and meat industries will lose $39.94 billion per year to heat stress by that same date.

At the same time, a swelling middle class in many developing nations is adding to demand for dairy items, while policies aimed at helping the environment are discouraging farmers in some areas from expanding their production. That collision portends higher prices and potential shortages of grocery-list staples such as cream cheese or yogurt.

“Climate change adds to the volatility or the variation in your supply, and the knock-on effect to that can be increased food insecurity,” said Mary Ledman, global dairy strategist at Rabobank.

Despite expensive efforts to keep their cattle cool, dairy farmers can’t escape the impact heat has on their herds.

Tom Barcellos, who has been raising and milking the animals for 45 years in Tipton, California, has a complex cooling system at his farm. Complete with fans and misting machines, it even plans around the direction of the wind. But he finds warm nights can sap production.

“If you have higher temperatures in the evening, and it’s a little more stressful on the cows, there’s a potential to lose 15%, or maybe even 20%, in the most extreme cases,” said Barcellos, who has 1,800 cows.

It’s a similar story on the other side of the world, where Sharad Bhai Harendra Bhai Pandya and his brother have more than 40 cows in the western Indian state of Gujarat.

Pandya houses his cattle in a shed with a fogger system, which pumps in water and converts it to mist. But he still sees milk production at his farm decline more than 30% during the sweltering heat of summer.

Rising temperatures are likely to make such conditions a reality for more farmers, for longer stretches of time. That makes for difficult investment decisions.

Ranu Bhai Bharvad, a dairy farmer in India, doesn’t even own a shelter for his herd of 35 animals. His cattle only have the shade of a neem tree to fend off heat stress.

“I can’t afford to build a shed for my cattle,” said Bharvad, who supports his family of 15 with the profits from his farm.

Bharvad is hardly unique: India is by far the world’s biggest milk producer, its massive volumes produced in large part by tens of millions of small farmers who maintain modest numbers of animals.

Amul Dairy, which buys milk from Bharvad and other farmers like him, is responding to the challenging conditions by taking steps to protect supply.

“During winter when production is more, we conserve extra milk in [the form] of powder and use that defense in case of deficit during the summer,” said RS Sodhi, the managing director of the Gujarat Cooperative Milk Marketing Federation Ltd., which owns the Amul brand.

Australia, the driest inhabited continent on Earth, offers a preview of how the global dairy industry could crack under the pressure of climate change.

The country was once a heavyweight in the business, but milk production has trended sharply downwards and its share of global dairy trade has dropped from 16% in the 1990s to around 6% in 2018.

The downscaling was fueled by a succession of extreme heat waves, including a drought that lasted from 1997 to 2010 and another that spanned 2017 to 2020. The more recent one was the nation’s worst on record, and the pressure it put on prices for water and cattle feed squeezed farmers’ bottom lines. Those difficult business conditions added to a mass exodus from the sector: The number of dairy farms Down Under shrunk by almost three quarters from 1980 to 2020.

Now, dairy farmers still face the risk of punishing weather, but fresh pressures have been layered on that are driving still more of them out of the business. In 2022, Australia’s milk volumes are forecast to sink by more than 4% to 8.6 million metric tons, according to the US Department of Agriculture.

The USDA says that reflects dry conditions in key milk-producing regions, but also challenges associated with worker shortages, including some farmers opting to switch to beef cattle production, which is less labor-intensive.

Government policies, too, could end up weighing on global dairy production. In neighboring New Zealand, the world’s biggest dairy exporter, farmers will start paying a levy on agricultural emissions by 2025. While dairy farmers have done much to mitigate emissions, necessities such as manure, fertilizer and feed production still make them fairly heavy emitters of greenhouse gases. Farm groups are sounding the alarm that the tax might nudge dairy producers to repurpose their land for forestry or other uses.

The challenges facing dairy farmers are already affecting availability of certain products. In France, a type of premium cheese called Salers isn’t being produced this year. It must be made using milk from cows that are grass-fed — a hurdle when pastures were destroyed as a heat wave swept the country this year.

While the absence of fancy cheese is hardly an emergency, similar production issues could roil the market on a grander scale amid extreme temperatures.

“If you’re talking about a five- to 15-year time horizon, we will probably see production peak and flatten out in regions with a lack of water,” said Nate Donnay, director of dairy market insight at StoneX Group Inc. “In the 15- to 30-year horizon, we could see production trend lower in those regions.”

All of this could mean higher prices or even shortages of some dairy products.

Melvin Medeiros, a farmer in the leading US dairy producer, California, says extreme weather is likely to reshape farming operations in his state over the next decade. He expects to see fewer cows and a reduction in farmable land — a dynamic he partially chalks up to a lack of government intervention.

“We’ve failed to address a situation that’s been occurring for over 50 years,” said Medeiros. “Now our back’s against the wall, and we have no other option, but to reduce production or do something to address the current situation.”