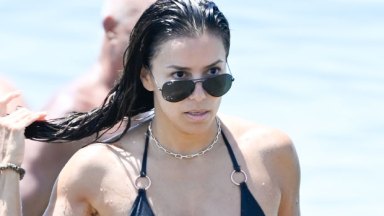 
Eva Longoria, 47, was the perfect image of summer during her latest beach outing. The actress showed off a black bikini as she and her cute son Santiago, 4, enjoyed time in the sun together. The duo strolled around before eventually hitting the waves in the ocean to cool down and looked like they were having the time of their lives.

The beauty held Santiago, who wore multi-colored patterned swim trunks, close to her as she walked in the water, and donned sunglasses to keep the rays out of her eyes. She had her hair down and didn’t pay much attention to cameras as she blended in with other beachgoers. It was definitely a sweet mother-son moment and helped to show the bond the pair has together.

Before Eva splashed in some waves with her tot, she made headlines for an outing on a yacht in Spain last week. She wore a pink bikini with a gray sweatshirt over it as she admired the gorgeous view, in an eye-catching pic she posted to Instagram on July 17. She also had her long straight hair down as it blew in the wind and added sunglasses to her look.

Spain isn’t the only place Eva’s been enjoying her summer. She, her husband Jose Baston, and little Santiago were also spotted in Italy just days before. They were photographed on a boat, and the television star chose to show off her fit figure in a red bikini for that outing. It again looked like a relaxing outing and kept the family close during a beautiful day.

When Eva’s not wowing in bikinis during vacation time with her family, she’s getting attention for her work as an actress. The talented star attended a Cannes Film Festival party back in May and posed on the red carpet in a black sleeveless dress with sheer sections. The event was called the Chopard Loves Cinema Gala Dinner and she mingled with other gorgeous celebs, like model Bella Hadid, throughout the fun night.