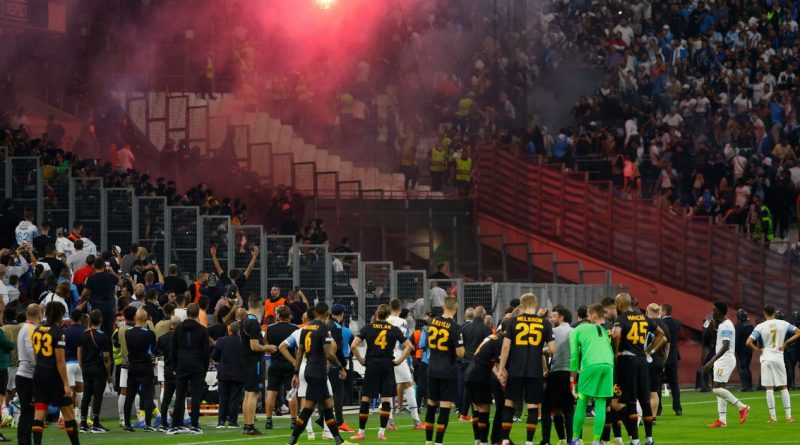 The scenes off the pitch caused the game to be temporarily suspended late in the first half with proceedings paused for nine minutes amid attempts to calm down the situation.

Galasaray boss Fatih Terim and captain Fernando Muslera both made attempts to bring calm to the sets of fans with pleas to stop, alongside Marseille vice-captain Dimitri Payet.

Polish referee Pawel Raczkowski brought the game to a halt in the 37 th minute, before the game resumed nine minutes later.

It is the latest in an increasingly long line of ugly scenes that have marred the return of fans in French football this season.

The most high-profile incident came on 22 August and also involved Marseille, with their Mediterranean rivals Nice docked one point after the abandonment of their Ligue 1 clash.

Marseille’s Payet was struck by a bottle thrown from the home support at Nice’s Allianz Riviera stadium, before fans streamed onto the pitch amid a melee between rival players and staff.

Nice were subsequently ordered to play their next three home matches in Ligue 1 behind closed doors while the game will be replayed next month at a neutral venue, without fans.

Lens have also been ordered to play home matches behind closed doors until further notice after their fans stormed the pitch to confront their Lille counterparts at the Stade Bollaert-Delelis this month, in a game where riot police were called after rival fans hurled seats at each other.

Those were not the first games with crowd trouble in the league this campaign; Marseille’s Valentin Rongier was hit on the head by a bottle thrown from the Montpellier support in their opening day match, causing a 10-minute suspension of the game.

A flare is thrown between rival fans

Supporters invaded the pitch and flares were thrown in last week’s Ligue 1 clash between Angers and Marseille, while 16 Bordeaux fans suffered minor injuries after a bus carrying them was pelted with stones on the way to Montpellier.

Jean-Michel Blanquer, France’s Minister of National Education, Youth and Sports, told TV station LCI: “Certain clubs managed in the past to put an end to this unacceptable hooliganism.

“There are people who need to be banned from stadiums in future for this behaviour.

“We need to be firm. These people are damaging the image of the sport.”

Marseille and Galatasaray will both hold ambitions of reaching the knockout stages of the Europa League, with their Group E completed by Lazio and Lokomotiv Moscow.