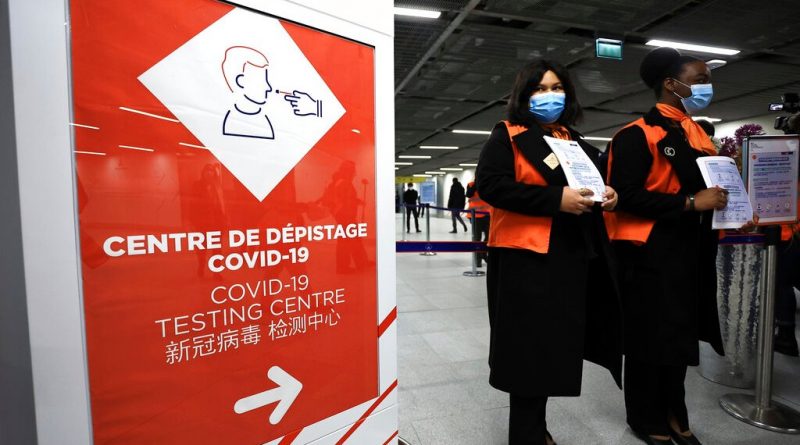 
BRUSSELS — The European Union and China on Tuesday moved closer to a political standoff over the COVID-19 crisis, with Beijing vehemently rejecting travel restrictions some E.U. nations have started to impose that could be expanded in coming days.

An E.U. offer of help, including vaccine donations, was also as good as slapped down, with Beijing insisting the situation was “under control” and medical provisions “in adequate supply,” government spokesperson Mao Ning said.

And as the 27-nation bloc moved closer to imposing some sort of restrictions on travelers from China, Beijing threatened countermeasures.

“We are firmly opposed to attempts to manipulate the COVID measures for political purposes and will take countermeasures based on the principle of reciprocity,” Mao said.

Still, the E.U. seemed bent on taking some sort of joint action to ensure incoming passengers from China would not transmit any potential new variants to the continent.

Sweden, which holds the E.U. presidency, also said in a statement that “travelers from China need to be prepared for decisions being taken at short notice.”

Fearful not to be caught unawares like at the outset of the global pandemic in early 2020, the E.U. Integrated Political Crisis Response group is now set on Wednesday to decide whether to impose E.U.-wide entry requirements from China.

Several member nations announced individual efforts over the past week. At the same time, the E.U.’s European Centre for Disease Prevention and Control insisted that the situation in China didn’t pose an immediate overall health threat.

“The variants circulating in China are already circulating in the E.U., and as such are not challenging for the immune response” of E.U. citizens, it said in its latest impact study published Tuesday. Other scientists have also said limits on travel would have little impact on containing the disease, but they also insisted on the value of looking for potential variants not in Europe at the moment.

Over the past week, E.U. nations reacted in a chaotic cascade of national measures to the crisis in China, disregarding an earlier commitment to act in unity before anything else.

Italy was the first E.U. member in requiring coronavirus tests for airline passengers coming from China, but several others have said such measures might not be the best option to protect local populations since new variants now coming from China have already been around in Europe, often for many months.

France’s government is requiring negative tests, and is urging French citizens to avoid nonessential travel to China. France is also reintroducing mask requirements on flights from China to France.

Spain’s government said it would require all air passengers coming from China to have negative tests or proof of vaccination.

The United States announced new testing requirements Wednesday for all travelers from China, joining some Asian nations that had imposed restrictions because of a surge of infections.