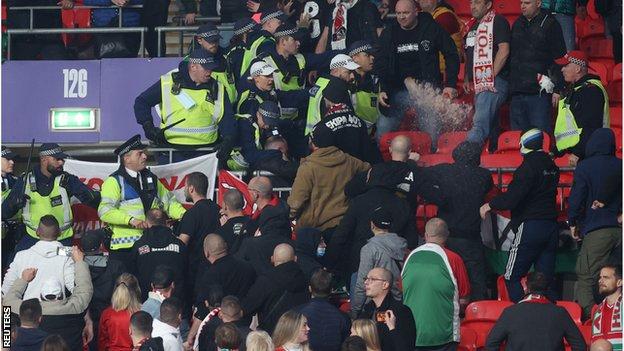 
Hungary fans fought with police in the opening minutes of Tuesday’s World Cup qualifier against England at Wembley.

Some of their supporters, totalling almost 1,000, booed again as England players took the knee before kick-off.

A Metropolitan Police statement said: “Officers entered the stand to arrest a spectator for a racially aggravated public order offence in relation to comments directed towards a steward.

“As officers made the arrest, minor disorder broke out.”

It added: “Order was quickly restored and there have been no further incidents at this stage.”

The Football Association said it would investigate and report the incident to Fifa.

Hungary fans – many in the black T-shirts of the country’s ultras – clashed with stewards soon after the game started and police arrived, hitting supporters with batons.

Many then climbed over a barrier and hit security personnel – with police driven back into the concourse.

There was trouble too when the sides met in Budapest with Hungary ordered to play two matches behind closed doors by Fifa following the racism English players experienced.

John Murray, commentating for BBC Radio 5 Live, said: “There are about 1,000 Hungary fans in that section. There was black netting over the seats either side to keep it isolated from England supporters.

“We were told before that they were all Hungary fans based in the UK who have taken the tickets. As soon as the match began there were really disturbing scenes.

“There were people in hi-vis jackets and fighting going on in the stands. There were punches being thrown. It was quite aggressive.

“Lot of the supporters involved were wearing black. There was trouble for most of the first half an hour or so and then things seemed to settle down.”

Less than 1,000 tickets were sold to Hungary fans for this game, the reverse fixture of last month’s meeting at Puskas Arena.

Racist abuse was aimed at England players in that qualifier while Gareth Southgate’s side were also pelted with objects in the second half and a flare was thrown on the pitch by Hungarian fans. Fifa opened disciplinary proceedings after England’s 4-0 win.

Despite Uefa ordering Hungary to play three home games behind closed doors after their supporters’ discriminatory behaviour at Euro 2020, fans were allowed in for the World Cup tie as it came under Fifa’s jurisdiction.

There was also trouble at Wembley when England lost to Italy in the Euro 2020 final on 11 July.

England fans fought with stewards and police as they attempted to break through gates before the match.

Some people inside Wembley said there had been fans standing on the concourse for the entire first half, watching the match.

Afterwards, riot police could be seen breaking through crowds outside the stadium as people departed.

Beer bottles were thrown amid chants against Italy and the Met Police said there had been 45 arrests at the final, with 19 officers injured “while they confronted volatile crowds”.

Uefa opened disciplinary proceedings against the Football Association over the events.