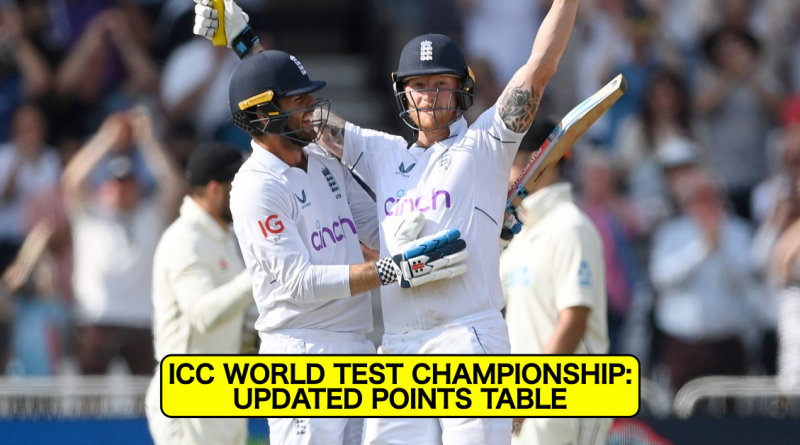 
England defeated New Zealand by 5 wickets in the second Test of the ongoing Three-match series which was played at Trent Bridge in Nottingham, by chasing down a daunting 299-run target on the fifth day of the match on June 14, 2022. This has made some interesting changes in the ICC World Test Championship points table.

New Zealand had done well in their second innings to make 284 runs thanks to half-centuries from Will Young (56), Devon Conway (52), and Daryl Mitchell (62*), and thanks to a small lead of 14 runs in the first innings, managed to post up a difficult target of 299 runs for the Ben Stokes-led England team.

The BlackCaps also got a good start as Trent Boult accounted for Zak Crawley for 0 and Joe Root for 3, while Tim Southee removed Alex Lees for 44 and Matt Henry got rid of Pope for 18 runs, reducing England to 93/4 and tension started to build in the three lions camp.

But then Jonny Bairstow and Ben Stokes took the challenge by its horns and added a quick 176 runs for the fifth wicket. Bairstow was the more aggressive one as he slammed a brilliant 136 runs with 7 sixes and 14 fours, before becoming the third victim of Trent Boult, who had picked a fifer in the first innings.

Ben Stokes continued to haunt the Kiwi bowlers as he finished on 75* with 10 fours and 4 sixes, as he led England to a 5-wicket win and a 2-0 lead in the series.

England captain Ben Stokes had won the toss and chosen to bowl first but would have regretted his decision as New Zealand went on to pile up 553 runs in their first innings. Daryl Mitchell hit his second straight century in the series, making his Test-best 190 with 23 fours and 4 sixes, while Tom Blundell made 106 with 14 fours here in Nottingham, adding a New Zealand record of 236 runs for the 5th wicket.

England’s reply was also in the same vein as Joe Root continued his golden run with the bat, scoring 176 with 26 fours and 1 six, while Ollie Pope hit his first Test century at the new no.3 spot, making 145 with 13 fours and 3 sixes. Apart from these two, Ben Stokes made 46 and Ben Foakes made 56 runs, as England piled 539 in reply.

Trent Boult for New Zealand picked a fifer, while James Anderson had completed his 650 wickets in Tests during this Test match.