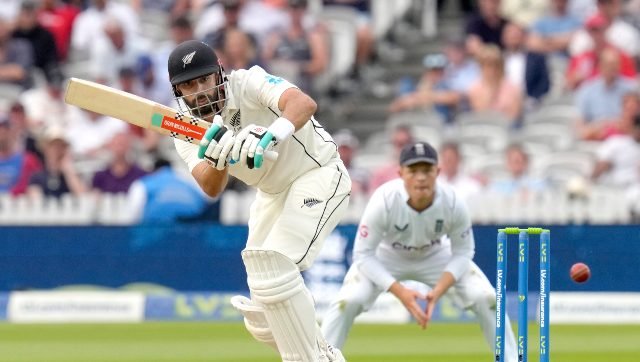 
New Zealand batting all-rounder Daryl Mitchell is hoping to get some help from the surface on Day 4 of the Lord’s Test against England so that the Black Caps can register a victory.

England lost the wickets of Alex Lees, Jonny Bairstow, Ollie Pope, and Zak Crawley at the score of 69 during their 277 run-chase. However, former captain Joe Root and current captain Ben Stokes had a brilliant partnership that helped England gain back the momentum.

England just need 61 runs to win the Lord’s Test against the New Zealand team with 5 wickets in hand and with Joe Root being out in middle it seems like England will go past the finish line.

Meanwhile, Daryl Mitchell said that the New Zealand players are backing themselves to bag all 10 wickets and win the match on Day 4.

“We still back ourselves to take 10 wickets and I know we’ll show up tomorrow morning now with the chance to open up an end and get stuck into their bowlers. I think we can see with the nature of this wicket that the morning is the toughest time to bat

“Hopefully we can show up tomorrow morning and it zips around a bit like it has the last three days, and we’ll give ourselves an opportunity to win a test match,” Mitchell said, as quoted by Stuff.co.in.

Daryl Mitchell smashed a sensational century in the second innings of New Zealand at the iconic Lord’s Cricket Ground, London. He had a brilliant partnership with Tom Blundell and his innings ended at 108 runs off 203 balls, including 12 fours.

While talking about getting his name on the Lord’s honours board, Mitchell said that it is a big honour for him. He elaborated:

“It’s obviously a big honour. Probably a few hour’s sleep last night that you sit there and plan a few different shots in your head about how you’re going to get the job done. It was nice to get it done nice and early and not really have to worry about it.

“It probably hasn’t sunk in yet what happened, but I’m sure over the next few days it’ll start to sink in and I’ll realise what did occur today, which is special.”

Also Read: ENG vs NZ: Joe Root Is One Of The Calmest, England’s Best-ever Batsmen – Stuart Broad After Day 3 Of Lord’s Test